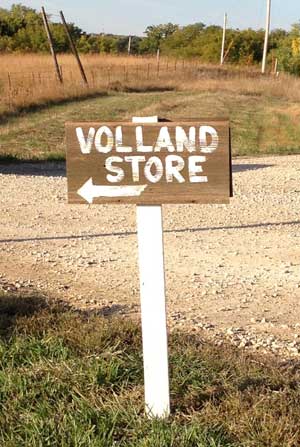 The Volland Store is listed as a Kansas Historic Place and sits just off the Skyline-Mill Creek Scenic Drive, one of the prettiest routes through the Flint Hills. The neighbors along Mill Creek Valley are mostly ranchers, many of them descendants of homesteaders. They take pride in the history of this place and in their ancestors, who carved a living from these hills and valleys. A sprinkling of newcomers rounds out the mix – folks who have been drawn here by the extraordinary beauty of the Flint Hills and have a genuine appreciation not only for the tallgrass prairie, but also for its culture and traditions.

Volland and the Kratzer Brothers store prospered under the twin industries of ranching and the railroad, and this history remains evident today. The scenic drive from Alma boasts many ranches, and as one approaches from the east on Old Highway 10, a feedlot marks the turn into Volland. A hundred yards south of the store, the Union Pacific runs frequent freights, whose passing whistles recall the days when Volland was a vital stop for fuel and water – and lunch. Kratzer was known to have the best deli on the line.

Times changed and when the trains no longer stopped, a decline in activity and population began.

Nonetheless, there’s no feeling of a ghost town, given the bustle of the cattle operation to the north and the train traffic to the south. Although hill country pastures are all around it, the Store occupies level ground. It’s not tucked away or remote; it’s in plain view and open to all.

When it was constructed, The Volland Store may have been as sophisticated as other buildings elsewhere, but what made it remarkable was the land where it stood. The Flint Hills gave rise to a unique culture, and the role The Volland Store played within that society is what made the building extraordinary.   Preserving this building and its history is a way of preserving the lifestyle and traditions of the Flint Hills themselves.