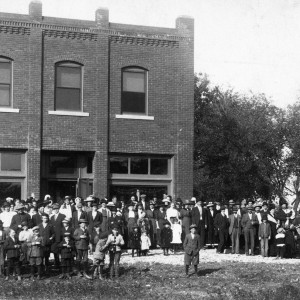 The Volland Store today is not the general store it was in 1913 when it opened as Kratzer Brothers Mercantile. Filled with every kind of merchandise, the Store quickly became more than just a store. It became the social and cultural center of Volland and the surrounding community. On Thursday evenings couples came to shop and stayed to visit. Sunday afternoons families came to picnic on the west lawn under the trees. The teacher from the nearby oneroom school stopped in almost every afternoon, and children walked to the Store for penny candy. The Volland Store was a centerpiece of the community until the early 1970s when it closed after the death of its storekeeper, Otto Kratzer. But the memories remain strong, and the building is still known as The Volland Store.

Although Otto’s descendants attempted to maintain the building, they eventually moved away, and it was difficult to do so from a distance. Years passed, and finally a persistent leak caused the roof to cave in, collapsing the second and first floors into the basement. Thirty years of rain, sleet, snow, hail, and wind ensued, but the brick walls never wavered. They stood strong, a testament to the fine craftsmanship of the original builders and to the quality of design and materials chosen by the Kratzer brothers. The empty building continued to remind neighbors and relatives of the good times they experienced there.

At the turn of the present century, a new family came to Wabaunsee County and heard stories of the building that stood vacant and begged to come alive. Patty and Jerry Reece had bought and restored old buildings before, and this one caught their eye. It was too good to let just melt away. More than that, it held an important place in the heart of the community. That was clear from the way eyes lit up when old stories were told.

A decade or so later, Kratzer’s granddaughter began to look for someone who would buy the Store and restore it. With the promise that the building wouldn’t be torn down, an agreement was reached, and the property passed to new owners, the Reeces.

A first look inside revealed a mountain of debris reaching to the first floor. There was only one way in and out, down broken steps through a door (that miraculously still opened) into the basement. A couple of strong guys with five-gallon buckets soon began clearing the rubble until there was enough room to bring in heavy equipment to finish the job.

As word spread that the building was being worked on, a combination of curiosity and disbelief fueled interest and, eventually, strong support for the undertaking.

An engineer, architect, designer, and builder, along with their larger teams, dedicated their considerable talents and energy over a couple of years to give The Volland Store a chance at a second century. It has been more than a building project for all involved. It has been a journey to return the building to its rightful place in the community.