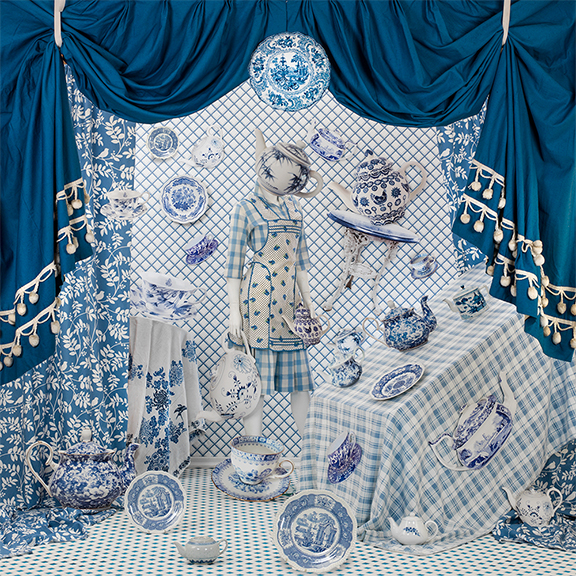 “Patty Carroll on Anonymous Women, an exhibit at The Volland Store”
Thursday, September 28, 5:30 pm
Marianna Kistler Beach Museum, Kansas State University
14th St. and Anderson Avenue in Manhattan
A conversation following the artist’s remarks will be moderated by Aileen June Wang, Curator at the Beach.
presented by The Volland Store and the Beach Museum

“Lunch with Anonymous Women and Patty Carroll”
Thursday, October 5, 11:30 am -1:30 pm
at The Volland Store
24098 Volland  Road, Alma Kansas
Anonymous Women will provide the perfect environment for a luncheon where women can become part of the art and discuss ideas, responses and opinions regarding the photographs. In addition to the large, luscious photographs on the walls of the gallery, Ms. Carroll has constructed a wall-papered “house” that incorporates video. The work is universal to women and will likely spark lively conversation. Ms. Carroll will be present to join in!
Seating is limited. $12 per person.
Reservations
or call  785-499-3616

The project started when we were living in England, and I was only known through my domestic status as Mrs. Jones, my married name. It left me feeling like I was lost or fading into the woodwork, literally.

Growing up in the suburbs of Chicago provided the basis of all of my work, and I continually seek to come to terms with it. I grew up when suburban life was idealized; the home was a place of perfection and harmony, free from harsh realities of the city, without crime, or messy interiors, where everyone’s drapes and sofa matched, where people were normal, without dark little secrets. It was at time when the “woman’s place was in the home.” I am photographically creating worlds that debunk, critique and satirize these myths of claustrophobic perfection.

My series of photographs, Anonymous Women: Draped is about becoming the dwelling itself: experiencing the dichotomy of domesticity. The home is a place of comfort but can also be camouflage for individual identity when idealized decor becomes an obsession, or indication of position or status. “Staying home” is a state that some women also aspire to as a place of power, while others abhor because of its prison-like atmosphere. In all cases, women need “a room of their own.” This series has references to draped statues from the Renaissance, nuns in habits, women wearing the burka, the Virgin Mary, priests’ and judges’ robes, ancient Greek and Roman dress, among others. The series is also a small tribute to Scarlett O’Hara, who, undaunted by wars, pulled down her drapery to fashion a beautiful gown, and would do anything to keep her home, Tara. Hopefully, I am bringing humor to pathos.

Moving forward from the “Anonymous Women: Draped” series, I continue to hide my women. In this series, the woman performs domestic trickery while trapped by her objects and obsessions. I am constructing a life-size room filled with objects camouflaging a female figure. The space and stories are suspect, inviting hilarity and pathos about our relationship with “things.”

The photographs are published as a monograph, Anonymous Women, released officially in January, 2017 by Daylight Books.
Signed copies will be available for purchase at The Volland Store.

The Anonymous Woman series has been exhibited internationally and has won multiple awards including Carroll being acknowledged as one of Photolucida’s “Top 50” in 2014. Her work has been featured in prestigious blogs and international magazines such as the Huffington Post, The Cut, Ain’t Bad Magazine, and BJP in Britain. Her work has been shown internationally in many one-person exhibits in China and Europe, as well as the USA. (White Box Museum, Beijing, Art Institute of Chicago, Royal Photographic Society, Bath, England, among others.) She has participated in over 100 group exhibitions nationally and internationally, and her work is included in many public and private collections. After teaching photography for many years, Carroll has enthusiastically returned to the studio in order to delight viewers with her playful critique of home and excess.  She is currently Artist in Residence at Studios Inc. in Kansas City, Missouri.