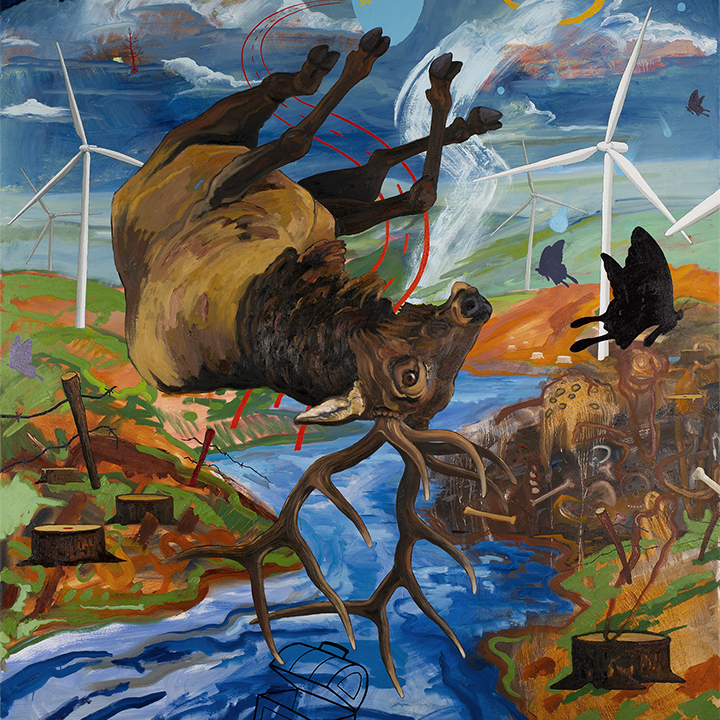 My art actively seeks to engage people in examining important issues. I address the topics of personal and cultural survival. Instead of speaking out words, I pursue a visual dialog. Through color, line, and visual form, I express deeply felt concerns regarding removal, disturbance, and the struggle to reclaim cultural context.

As an Osage artist, I explore issues of identity, culture, including mythos, place, and the dynamics of personal and cultural transformation. Over the years I have used a visual vocabulary consisting of images and symbols drawn from my cultural heritage, personal life experiences, and contemporary culture. The underlying principles that inform my art include tribal oral histories, art historical references, and nature.

Through visual narrative, I explore how my point of view relates to a historical, political and cultural sense of place in contemporary society. The use of narrative in my work acts as a continuation of the Native American storytelling tradition. Ancestral tribal stories and sayings have served to explain the world in which we lived. New and emerging stories serve as allegories of transformation in an ever-changing world.

Norman Akers was born and raised in Fairfax, Oklahoma. A rural community located in the Osage Hills, in the southern portion of the Flint Hills. He is a member of the Osage Nation. He received a BFA in Painting from the Kansas City Art Institute in 1982, and a Certificate in Museum Studies from the Institute of American Indian Arts in 1984. In 1991, he received a MFA in Fine Arts from the University of Illinois, Urbana-Champaign.

In 2007 he was selected to participate in the “We Are All Knots” print project, sponsored by the National Museum of the American Indian and ART in the Embassies Program Print Series. He was a recipient of the Joan Mitchell Painters and Sculptors Grant in 1999.

In 2009 he accepted a teaching position at the University of Kansas where he is currently an Associate Professor of Drawing and Painting.