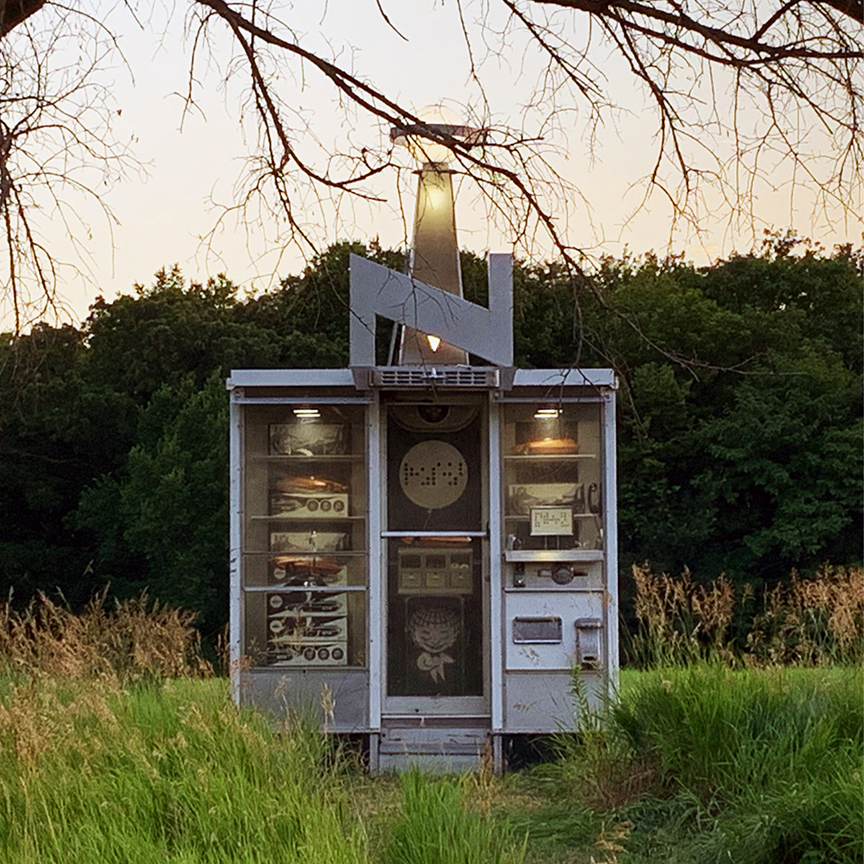 Bring your lawn chair and a picnic –
Visit with neighbors and make new friends as you wait for sunset.
Watch NuPenny emerge as light fades and darkness falls.

Music by The Cicadas.  Lighting by The Fireflies.

for information on the DEEP ROOTS II exhibit in the gallery

It is unclear how many NuPenny Toy Stands there actually were in the United States, or if in fact there ever were more than one.

The first (known) sighting of a NuPenny Toy Store in modern times was in the town of Waterville, Maine in 2009, but it was last seen in a field in 2016, near Towanda Kansas. Little has been heard or seen of the small, itinerant store since that time. But that could change this year, as troubled times gradually ease. Spring is here on the Great Plains, people are tentatively beginning, or considering the prospect of moving about again. And with the warm south winds come the possibility of NuPenny setting its wandering sail – and Volland, nestled in the Flint Hills soul of Kansas, is just the type of place one might expect to see it reappear.

– somewhere in Volland, from June 26 through the rest of the summer –

You may see it in a field at Volland this summer, even when the gallery is closed.
Best viewed from sunset until dark.  Bring your lawn chair. 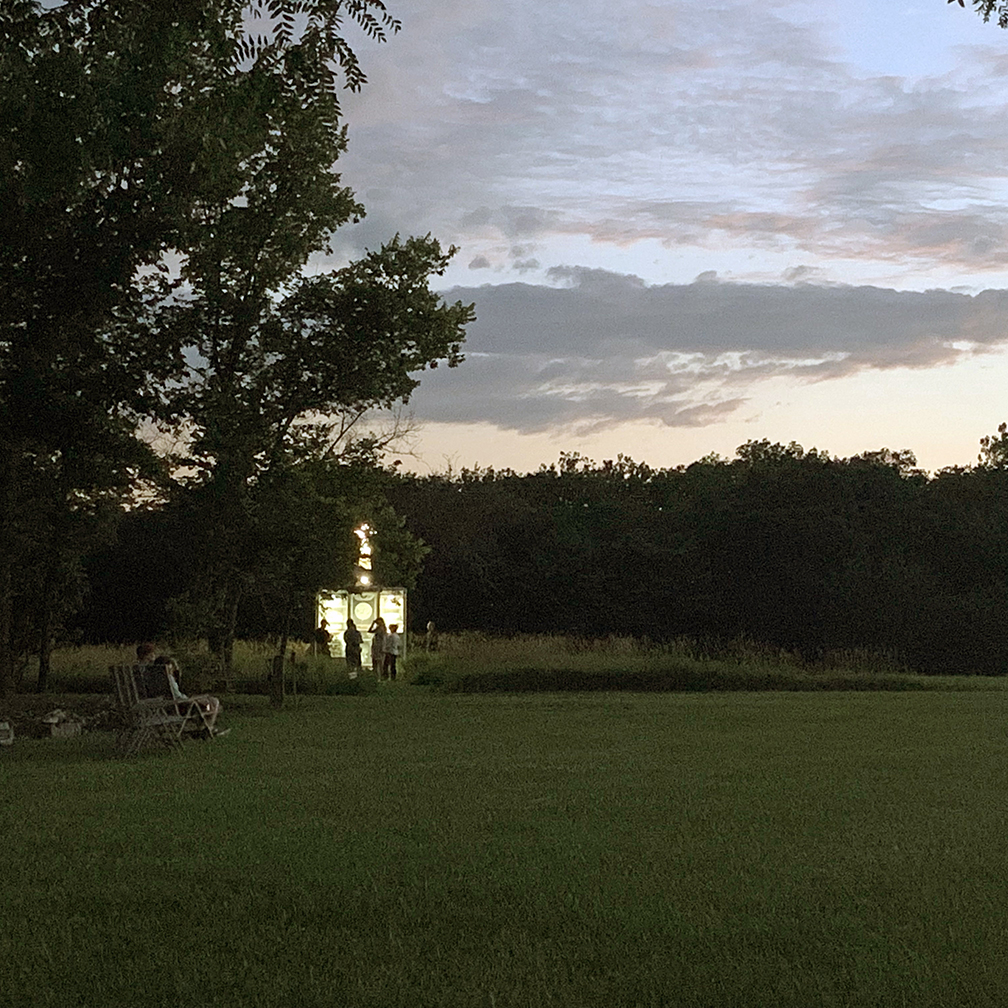 In 1928 the German literary critic Walter Benjamin wrote in his essay, “The Cultural History of Toys,” that, “Children do not constitute a community cut off from everything else…their toys cannot bear witness to any autonomous separate existence, but rather are a silent signifying dialogue between them [children] and their nation.” This is not only true for toys (of which much of my work is concerned), but for all manner of objects – artifacts – from our collective past that are formed and fabricated by human hands and intentions. This is the realm in which I work and play, and seek to understand my culture and history.

Much like a shiny new penny found lying on the sidewalk, NuPenny’s Last Stand immediately catches your eye, and invites interaction. The work, by Kansas City-based Randy Regier, sparks the imagination with its mid-century motifs and nods to toy-making. Informed by his time as a body mechanic, married with seemingly boundless ingenuity, Regier constructed the store’s items by hand. NuPenny occupies the space between our known history and imagined future, generating a mystique much like that experienced in The Twilight Zone, a reference point for the work. Those looking to purchase one of NuPenny’s Atomic Age offerings will surely be disappointed; the stand is locked, leaving prospective buyers at the moment right before a purchase, full of wonder.

Little is known about NuPenny’s history, or its future for that matter. We do know the stand appeared most recently in a field in Towanda, Kansas. When asked about where NuPenny will appear next, Regier offers little information, adding to the fleeting nature of his installation.

Beyond his three-dimensional creations, Regier’s works on canvas and performances expand on the themes forwarded in NuPenny’s Last Stand. In, Colony 39, a series of mixed media works, Regier reflects on a Japanese toy he purchased in the 1980s, lost but still resonant, especially its mysterious qualities. The artist echoes the feeling in the series, where he examines the “unknown, the enigmatic, the experience of both encountering and/or being the other.”

Randy Regier is represented at the Ruben Saunders Gallery in Wichita, and the Jim Kempner Fine Art gallery in New York. Find more informationn at randyregier.com.

Born in Nebraska, Randy spent his youth in Oregon and became a professional autobodyman and painter.   Eventually he and his family left so he could pursue and obtain higher education, a BFA in Sculpture at Kansas State University and an MFA in Studio Arts and Theory at Maine College of Art.

Regier says, “My entire life has been spent in the company of toys, cars and tools, but my mind has always wandered toward literature and questions about purpose and aesthetics.”  In 2014, Regier was one of three Kansas artists selected for State of The Art: Discovering American Art Now, at Crystal Bridges Museum of American Art, Bentonville, Arkansas.  His studio is now centered in Kansas City, Kansas. 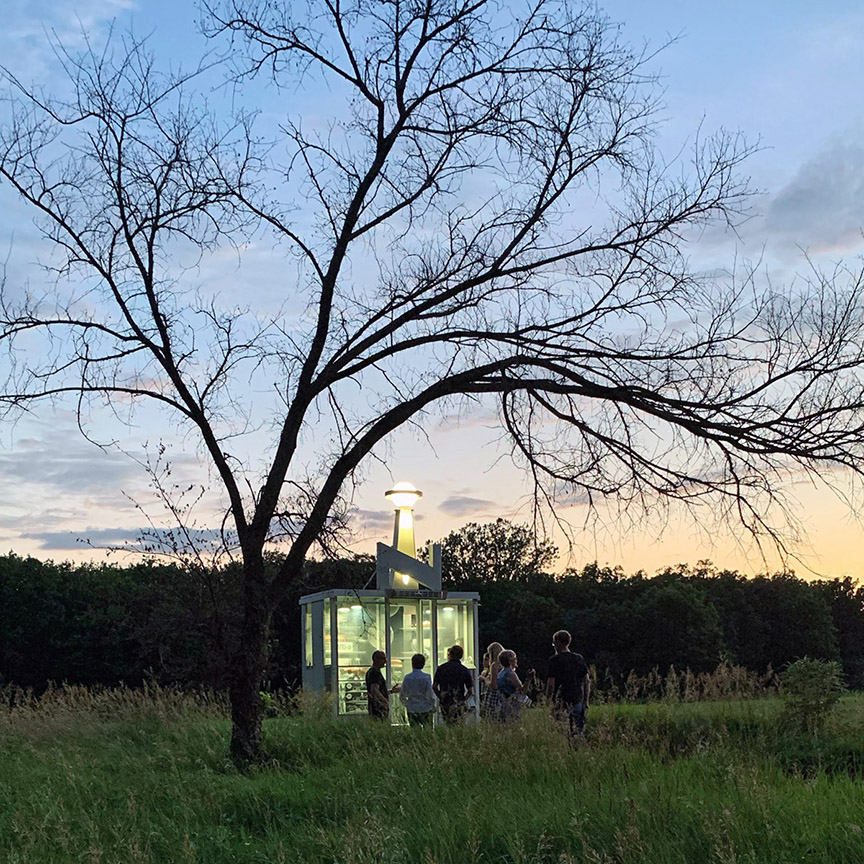 Filed Under: Past Exhibitions, Uncategorized |