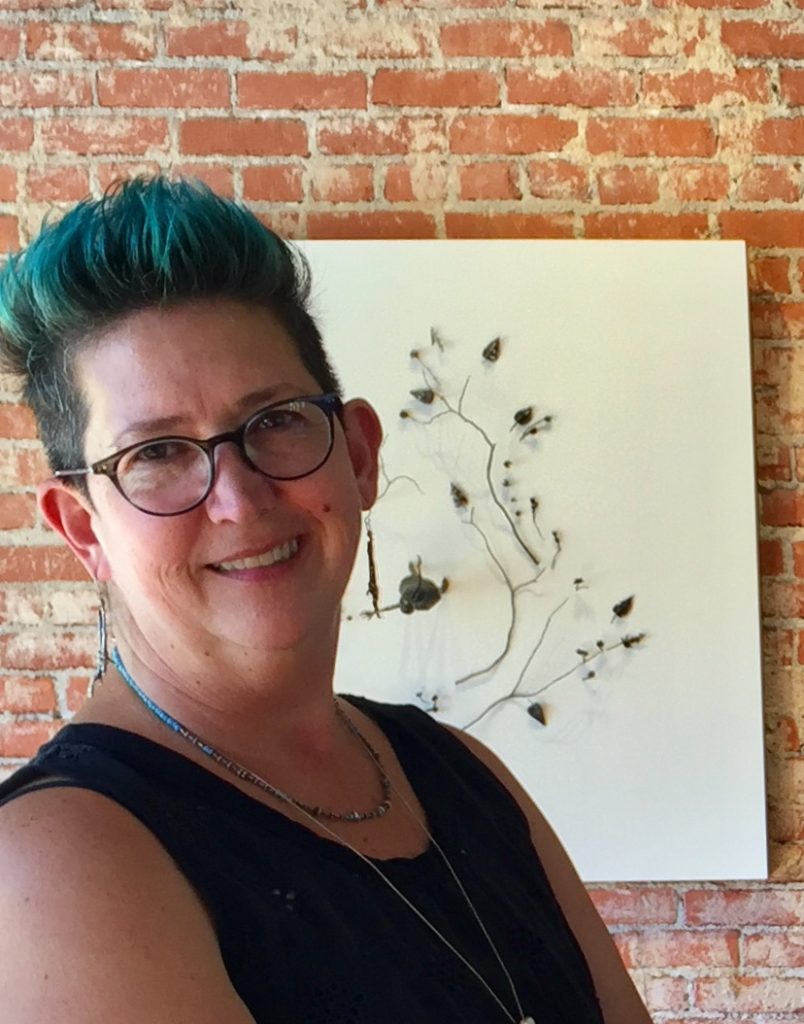 Holly Wilson with “Finding My Way Back” at The Volland Store

Conversation with the Artist | 2 pm

Wearable Art by Holly Wilson will be available for purchase 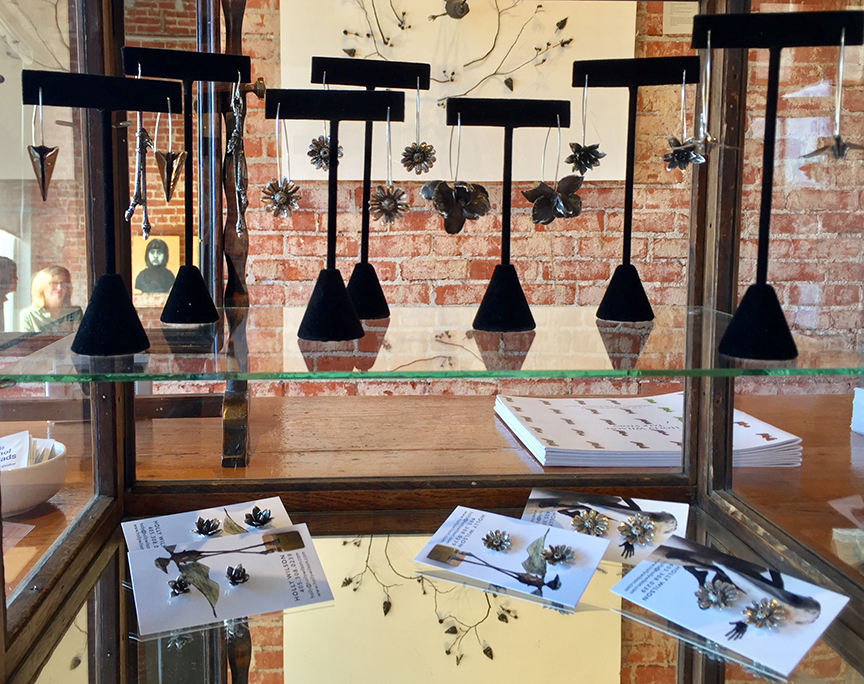 Holly Wilson does not shy away from her personal history in her work.

The Mustang, Oklahoma artist, of Delaware Nation and Cherokee Nation lineage, works across several mediums in her efforts to “create a tapestry that tells stories that are sacred and precious, personal and universal, powerful and at times volatile.” Together, the works offer a glimpse of the artist’s history, present, and future.

The exhibition’s title, Holly Wilson: Upturned Flower that Travels echoes the personal and narrative themes she engages. Marrying her English name with the translation of her Native name, Wilson highlights her perspective as both white and indigenous. Wilson’s work invites interaction, coming off the wall to meet the viewer with bold imagery, serving as a magnet for eyes. Viewed individually, Wilson’s work act as vignettes. For instance, in her Bloodline, Wilson shares her family history through non-descript figures. In Two Sides of the Self, Wilson and the Bear, Wilson’s son is depicted in detail, contrasting Bloodline and generating an intimate observation of the artist’s present moment. Opening in Volland and later in New York City, the exhibition parallels Wilson’s Native name, travelling and sharing its story.

How do we measure time? The second, our base time unit, offers a start. The “cesium second,” established in 1967, codified the fleeting unit. Standardizing time is entirely human. A non-humanist interpretation might consider changing seasons, tidal patterns, or the position of celestial bodies. Bloodline: Past Present Future, a work of bronze, cedar, and steel by Oklahoma-based Holly Wilson, exists in the space where these two measurements of time connect. With natural materials and her unique bronze casting technique, Wilson utilizes medium choices to reflect on the Native experience, while posing a possible future.

Trees measure time in their own way. Their vertical growth marks the years from a sapling to a mature tree. The rings of a tree’s trunk track the years, while hinting at those year’s conditions: large rings suggest years of growth, while small ones show a strain. This measure of time is self-contained. A living record. Wilson’s choice of materials reflects her Delaware Nation and Cherokee Nation heritage. Wilson’s mother burned cedar to purify her home, and the artist has done the same in Bloodline. Purifying the space around her work, Wilson introduces viewers to her Native roots. The act also bridges the gap between natural and human measurements of time.

The toppled, splayed, and burnt cedar pieces in Bloodlines: Past Present Future underpin the human history Wilson explores in the multi-media work. Traversing the tripartite work are 42 bronze figures. Irregular in their features, but sharing attenuated legs, the forms are considered individually and collectively. The bodies in motion catalyze reflection on the Native experience, the current setting, and an unfolding history. In the Past the figures’ stride connotates involuntary removal. The Trail of Tears displaced over 60,000, including Cherokee. It also recalls the involuntary assimilation of Native children into colonizing culture through boarding schools. Much like the rings of trees, where thick and thin share the same form, Wilson noted during conversations leading up to the exhibition that what was once an injustice can morph into something different. Wilson explained a boarding school offered a job and security for her mother in a time of distress. Schools have, in some ways, restored what was taken away in previous generations. The Cherokee Immersion Charter School in Tahlequah, Oklahoma offers a different model, where Native culture is embraced, rather than erased. The rings of tree suggest a future: one marked with advancements and setbacks.

Bloodlines: Past Present Future invites viewers to consider the Native experience. Careful medium choices drive this theme. Viewers will notice two figures turned back from the procession, suggesting a dialogue between the Past and Present, the Present and Future. Utilizing materials specific to her history, married with her unique bronze castings, Wilson draws viewers into the conversation. 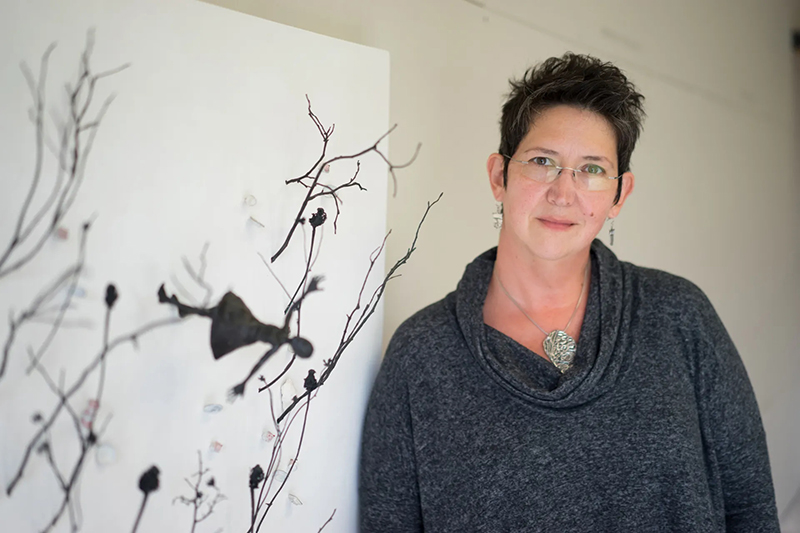 Holly Wilson, with Topsy Turvy, courtesy of the artist

Multi-media artist Holly Wilson creates figures which serve as her storytellers to the world, conveying stories of the sacred and the precious, capturing moments of our day, our vulnerabilities, and our strengths. The stories are at one time both representations of family history as well as personal experiences. Wilson’s work reaches a broad audience allowing the viewer the opportunity to see their personal connection. Wilson works in a variety of media including bronzes, paint, encaustic, photography, glass, and clay.

She has been exhibiting her intimate bronzes, photography, and encaustic relief paintings nationally and internationally since the early 1990s. Additionally, her works are in corporate, public, and museum collections throughout the United States, as well as national and international private collections such as; The Heritage in Oklahoma City, The Central Library in downtown Tulsa Oklahoma, Virginia Museum of Fine Art, the C.N. Gorman Museum, The Eiteljorg Museum of American Indians and Western Art, The Heritage Center at Red Cloud Indian School, and the Nerman Museum of Contemporary Art.

Wilson has received recognition for her artwork through her inclusion in important exhibitions, most recently Art for a New Understanding: Native Voices, 1950s to Now at Crystal Bridges Museum of Art. Wilson’s work has also been included in exhibitions such as Hear My Voice: Native American Art of the Past and Present, a traveling exhibition from the Virginia Museum of Fine Art in Richmond, Virginia. She was chosen to represent Oklahoma in the museum exhibition Four by Four 2016: Midwest Invitational at the Springfield Art Museum in Springfield, Missouri, and Expressions of Spirit at the Wheelwright Museum of the American Indian. Wilson has received many awards, grants, and fellowships for her evocative sculptures, including a 2017 SWAIA Discovery Fellowship from the Santa Fe Indian Market and a 2015 Eiteljorg Fellowship from the Eiteljorg Museum of American Indians and Western Art. Currently, Wilson has work in the exhibition Weaving History into Art: The Enduring Legacy of Shan Goshorn at The Gilcrease Museum in Tulsa, OK from October 9, 2020 – March 28, 2021.

Holly Wilson of Delaware Nation and Cherokee Nation heritage is now based in Mustang, Oklahoma. In in 2001 she graduated with an MFA in sculpture and in 1994 she earned an MA in ceramics both from Stephen F. Austin State University, Nacogdoches, Texas; she received her Teaching Certification in K-12 Art from Cameron University in Lawton, Oklahoma, in 1993; and in 1992 she finished her BFA in ceramics at the Kansas City Art Institute. 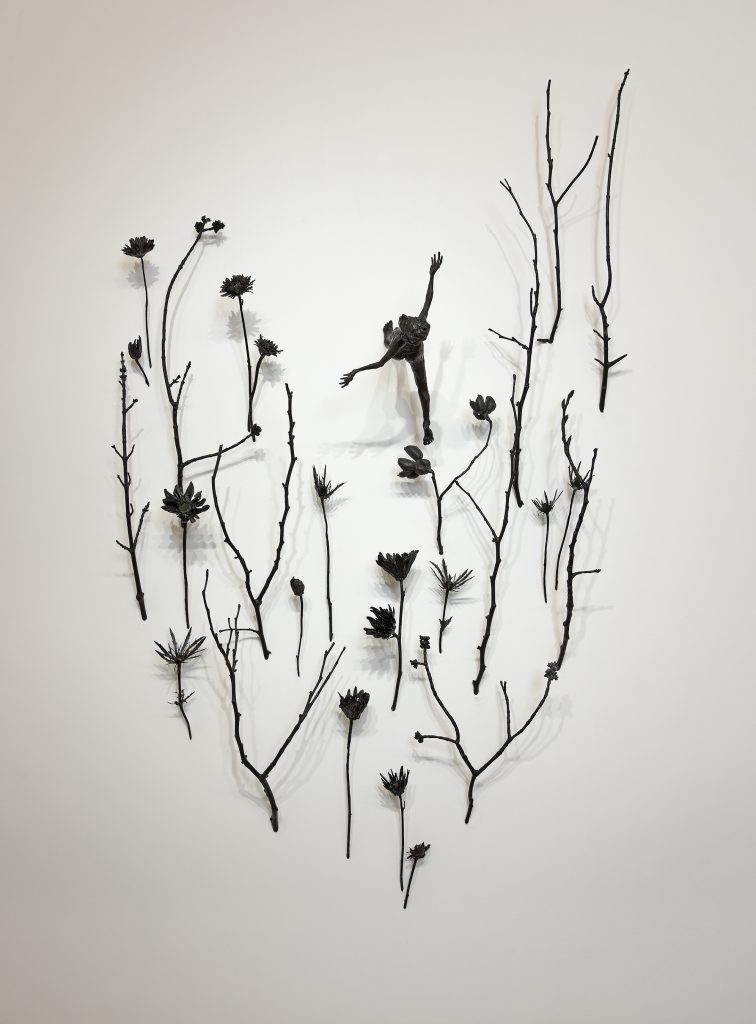 Narrative is central to my work. I am interested in stories—the stories of my parents, my ancestors, my family, my community. I am a storyteller; through my work, I weave together the threads of these various narratives to create a tapestry that tells stories that are sacred and precious, personal and universal, powerful and at times volatile. Telling them brings to life things sometimes kept secret, hidden, and not permitted to be said because they challenge the status quo or reveal realities that neither side wants said.

In a strategic trickster twist, I feature children, often masked, as a tool to bring the viewer into my story that on the surface seems benign or sweet but upon closer reflection addresses much deeper and challenging issues. Masks are multi-layered elements in my work. Simultaneously, they reference traditional Delaware and Cherokee stories that my mother told me as a child and symbolize transformation and obfuscation. Masks are a mechanism to hide or obscure our true intentions, acting as a wall between us and the world at times protecting us or others. They are also agents of transformation that allow one to become more than what they were, to become powerful or sometimes dangerous. The strategy is to subvert narrative expectations.

My work also addresses what lies beneath or in the shadows. Stories and narratives often have secrets lurking within. I am intrigued with the power of these “shadows” in our lives and how they haunt us or make us doubt our reality, at times even terrorizing us. I consciously incorporate shadows in my work by controlling the lighting and relationships of the figures, giving form to the secrets that linger in our lives. The secrets take form in my work as shadows that hang in and around the forms, shifting as the viewer’s position shifts much like how secrets take different forms sometimes benign and sometimes nefarious. 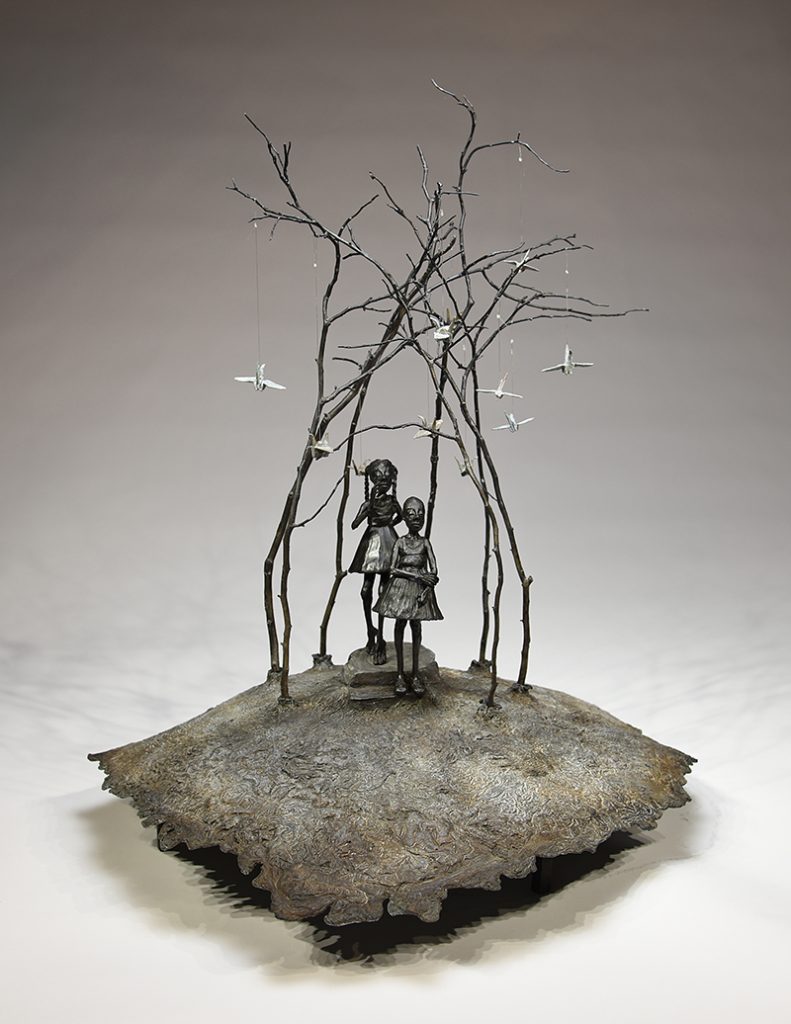 Saturday, November 6 – The artist will explain her process, using examples of the various stages of bronze casting.  In the Blacksmith Shop at The Volland Store, 2 pm.

Sunday, November 7 – Artist remarks followed by conversation. In the gallery at 2 pm.

Free admission. Refreshments will be served.
For your protection, and the safety of others, masks are required inside the gallery.