“The Unburdened Present” expresses a paradox as well as a double meaning, one ironic, the other straightforward. 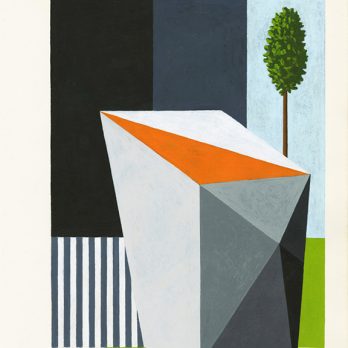 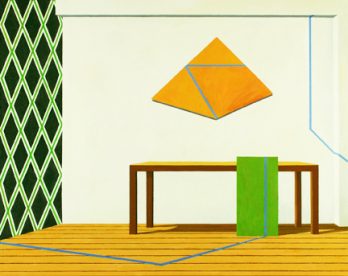 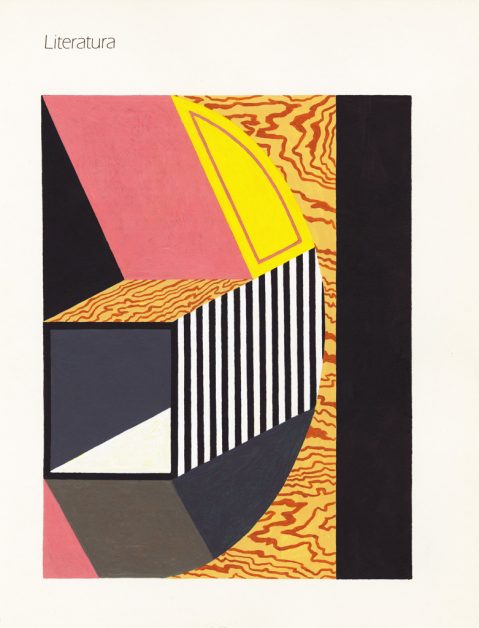 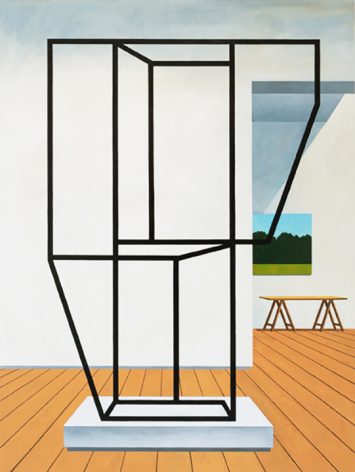 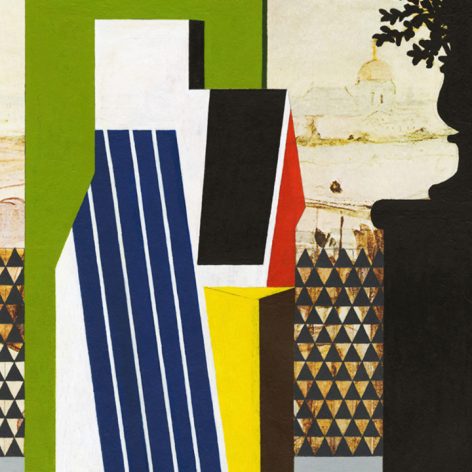 There is no such thing as an unburdened present, because the present is a product of the past, of history.

On the one hand, the work in this show has been made following purely formal considerations, and thus can be said to exist wholly in the present. That is the straightforward meaning of the title. On the other hand, because the present is a product of the past, and thus of history, there is no such thing as an unburdened present, neither in life nor in art. This is the ironic meaning, and this irony does not stop with Armin Mühsam’s art but extends to the historical events and fates of the people whose lives are dramatized in the programming that accompanies the show.

“For nearly two decades, I painted landscapes that addressed the impact Western society has on the natural world and how our desire for dominating it had alienated us from our fellow species and the land that sustains us. This work was meant to elicit reactions not so much about my choices of colors or shapes, but about my politics. Three years ago, a personal crisis prompted me to abandon this content and search for a language that would speak more authentically to this new phase of my life. I quit painting, both as a discipline and as a way to investigate the objective world, and started collaging non-objectively. This process of experimentation led to the aesthetic that now characterizes my practice. I have obviously not explored unknown territory – following the trail blazed by a century-old technique and reading the maps of Constructivism is not a noteworthy achievement – but my journey was (and is) nevertheless one of personal discovery, an idiosyncratic investigation of modernist methods that we contemporary practitioners in the 21stcentury sample for our own ends, much like 19th-century artists mined the art of the Renaissance and Baroque to make sense of their own confused times.”   Armin Mühsam

The title of the exhibition, “The Unburdened Present,” was chosen by the artist because it operates on several levels.

On the level of political history, the title alludes to the inclination of most Americans who are descendants of European immigrants to gloss over the fact that the establishment of the United States of America had as its price the extermination or removal of millions of aboriginal inhabitants from their homelands. As a recent immigrant to the United States and as an American citizen, Armin Mühsam is keenly aware of this history; as a German citizen, he is also carrying the burden of belonging to a nation that tried to expand its so-called “living space” by conquering large swaths of Eastern Europe and exterminating millions of Slavs and Jews living there. Ironically, Armin Mühsam is a Transylvanian German, which means that his family was both implicated in the perpetration of genocidal policies prior to and during the Second World War, as well as a victim in the aftermath of the war, when the Slavic population of Communist Romania pursued policies of retribution against the Transylvanian German minority.

On the level of art history, “The Unburdened Present” makes reference to the tenets of Modernism, which attempted a clear break from the art of the past by developing disruptive modes of artmaking, such as the shattering of a unified pictorial space (Cubism), the liberation of color from its chief responsibility of describing form in an illusionistic way (Abstraction), the attempt to separate aesthetics from rational modes of thought (Dada), and the introduction of materials and content previously excluded from art (Collage). The advocates and protagonists of Modernism all claimed that this abandonment of tradition would not only lead to an art that was more “real,” “true,” and “pure” than the art of the past 500 years, but that a new kind of aesthetics would lead to a materially and spiritually cleansed world. With the benefit of hindsight, it is evident that this mindset was just as utopian as the social experiments of Fascism and Communism, which made similar promises that couldn’t be kept.

All of Armin Mühsam’s work quotes from three of the above-mentioned Modernist modes in art history: Cubism, Abstraction, and, even though all pieces are painted, Collage; the long row of small pieces additionally makes reference to political history by superimposing Mühsam’s own compositions over pages torn from a Czech book on French Impressionism that was printed during the Cold War, when what is now the Czech Republic was Communist Czechoslovakia. With both his work and the choice of “The Unburdened Present” as the exhibition title, Armin Mühsam points to our indebtedness to history and the impossibility of escaping it, much as one sometimes wishes one could.

ARMIN MÜHSAM was born in Cluj-Napoca, Romania, the Transylvanian city that is called Klausenburg by its German, and Kolozsvár by its Hungarian inhabitants. In 1977, his family moved to what then was still West Germany and settled in Munich. He earned a BFA in Illustration at the University of Applied Sciences, in München, Germany, and an MFA in Painting at Montana State University, Bozeman, Montana.  Mühsam has exhibited internationally for more than two decades, and is widely collected and published.  He is currently a Professor of Art at Northwest Missouri State University in Maryville, Missouri.

Mühsam’s fascination with the American West began when he was a boy reading the novels of Karl May. The interest sparked by these fanciful books eventually led to in-depth research of Native American peoples and their reactions to the European conquest of their ancestral lands and cultures. In an oversimplified way, and with a good deal of irony, Karl May can be said to be the cause of Mühsam’s emigration to America.

March 30 | 7 pm   Screening of Big Sonia.  “Not just another Holocaust movie,” proclaims movie critic Christopher Llewellyn Reed. “Sonia [a Holocaust survivor] is a vibrant nonagenarian in Kansas City….lecturing at local schools to keep the memory of Nazi atrocities alive…. Beloved by those who know her, she is a testament to the strength and resilience of the human spirit.” The movie will be followed by a Q&A.   Appropriate for students Grade 7 and above.

April 7 | 2 pm  The Loveliness of Air (I Can’t Breathe) – an original work by Joseph Wytko, based on selected poetry and prose of children in the Terezín Nazi Concentration Camp. Featuring a performance by Anna Wytko, classical saxophonist. Introductory remarks by the composer at 2 pm. Reception to follow.