in conversation with the exhibition Hungry Heartland

in Celebration of the Inaugural Event of the Prairie Studies Institute

A Biennal Residency in the Flint Hills of Kansas 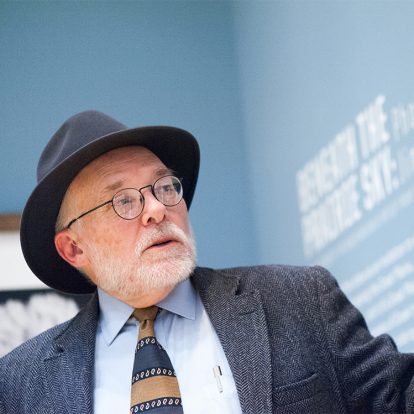 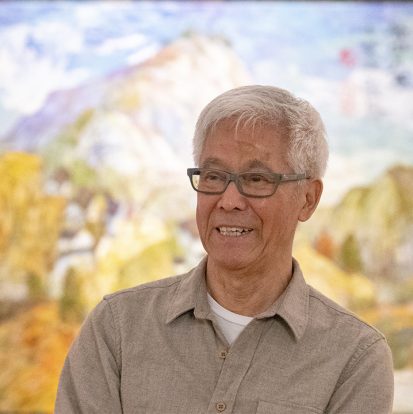 The first pair of PSI residents arriving this fall are artist Zhang Hongtu and photojournalist Jim Richardson.  Through public programs, Zhang and Richardson will discuss their interest in the tallgrass prairie in terms of ecology, agriculture, and culture. 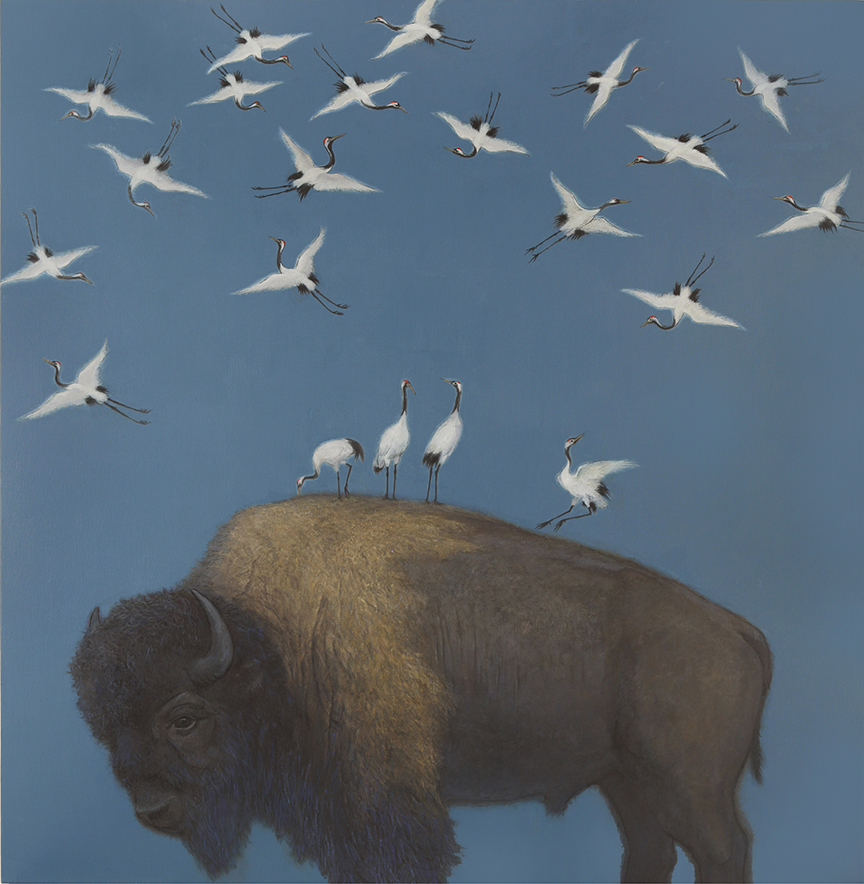 Bison with Cranes by Zhang Hongtu

grew up in China as a member of its Muslim minority, suffering persecution for his religion and his political beliefs under the regime of People’s Republic of China founder and Communist Party chairman Mao Zedong.

Hongtu traveled around China as a young artist and was heavily influenced by his study trip to Dunhuang in the western province of Gansu.

Dunhuang was an important stop along the network of trade routes known as the Silk Road, which connected Europe and Africa to the Middle East and Asia. Through the Silk Road, Buddhism traveled from India to China, resulting in the establishment of Buddhist cave temples around Dunhuang between the fourth and fourteenth centuries. The cave temples featured painting styles different from what Hongtu learned in art school and showed signs of the mural artists’ awareness of European painting.

In 1982, Hongtu moved to New York City to study art and decided to make the city his home.  His wife Miaoling and their infant son arrived in New York two years later.

His recent landscape paintings contemplate the impact of human activity on nature and native animals. His first visit to Kansas in 2018 inspired him to work on a new painting series on bison and prairie. Zhang is an internationally recognized artist whose work has been exhibited in Asia, Europe, and America.

To read his autobiography visit http://www.momao.com and select Reading Room, the Autobiography.  It is fascinating.

photographs global issues for National Geographic Magazine and is a documentarian who explores life in remote places. He is best known for his work on feeding the world in the face of peak population, preserving native grasslands and dark night skies, and living on lightly populated islands and skerries of Scotland.

A major part of his work focuses on the people and land of the prairie, as well as agriculture and food production in the American Midwest and abroad.  Jim has documented 40-plus years of life in the town of Cuba, KS, pop. 200, and part of these photographs were presented in the internationally award-winning video production “Reflections from a Wide Spot in the Road.”  Jim’s work has been profiled twice by CBS News Sunday Morning and by ABC News Nightline.

He speaks and exhibits around the world, as well as engages an audience of 450,000+ on his Instagram account. A Kansas native, Jim received an honorary doctorate from Kansas State University in 2017 and is an honorary citizen of Cuba, KS.

Presentations by Zhang Hongtu and Jim Richardson,  and related activities:

Thursday, October 10 | 5:30 pm
“New Yorker on the Prairie”
Zhang presents his work in progress for his new painting series on bison and prairie. Reception to follow.
Marianna Kistler Beach Museum of Art at Kansas State University