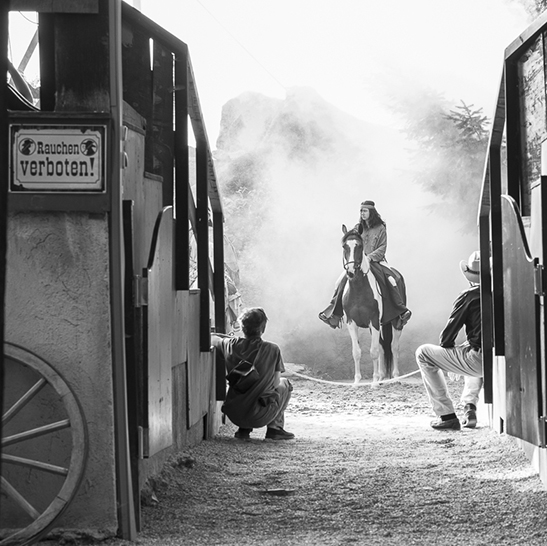 Staging the West sheds light on how the West continues to be romanticized, both in the United States and beyond.

The selected photographs for “Staging the West” come from two projects that explore the tension between the reality and mythology of the American West. The images were made in the Almeria region of Spain, and in locations across Germany.

After beginning a documentary project in Tucumcari, New Mexico I learned a fictional Tucumcari had been created in the Tabernas desert in Spain and used in the opening scene of the Sergio Leone film, For a Few Dollars More (1965). I traveled there in 2012 and 2013 to photograph locations used for “Western” films, the remnants of movie sets, and the surrounding area where people live. I first directed my attention to three cinema studios with their façade frontier towns and cowboy actors, then went beyond the sets and into the bars and brothels to make photographs that are evocative of a modern day western.

The next chapter to this collection of images is set in Germany where “Indianer(s)” dress in Native American costumes and perform theatrical productions of Western stories from the German popular fiction writer Karl May (1842 – 1912).  May had purportedly seen Buffalo’s Bill’s Wild West show in Dresden and thereafter fashioned himself after the famous frontiersman, complete with a fringed buckskin jacket and wide-brimmed hat. He wrote adventure novels set in the old American West that he claimed were from first-hand experiences, casting Native Americans as heroes and whites as corrupt villains.  Today these stories are told in open-air re-enactments reminiscent of Buffalo Bill’s Wild West show.

I am interested in the West as both a location and a state of mind.  Staging the West sheds light on how the West continues to be romanticized, both in the United States and beyond.

We are grateful to Stockgrowers State Bank for their sponsorship of “Staging the West.”