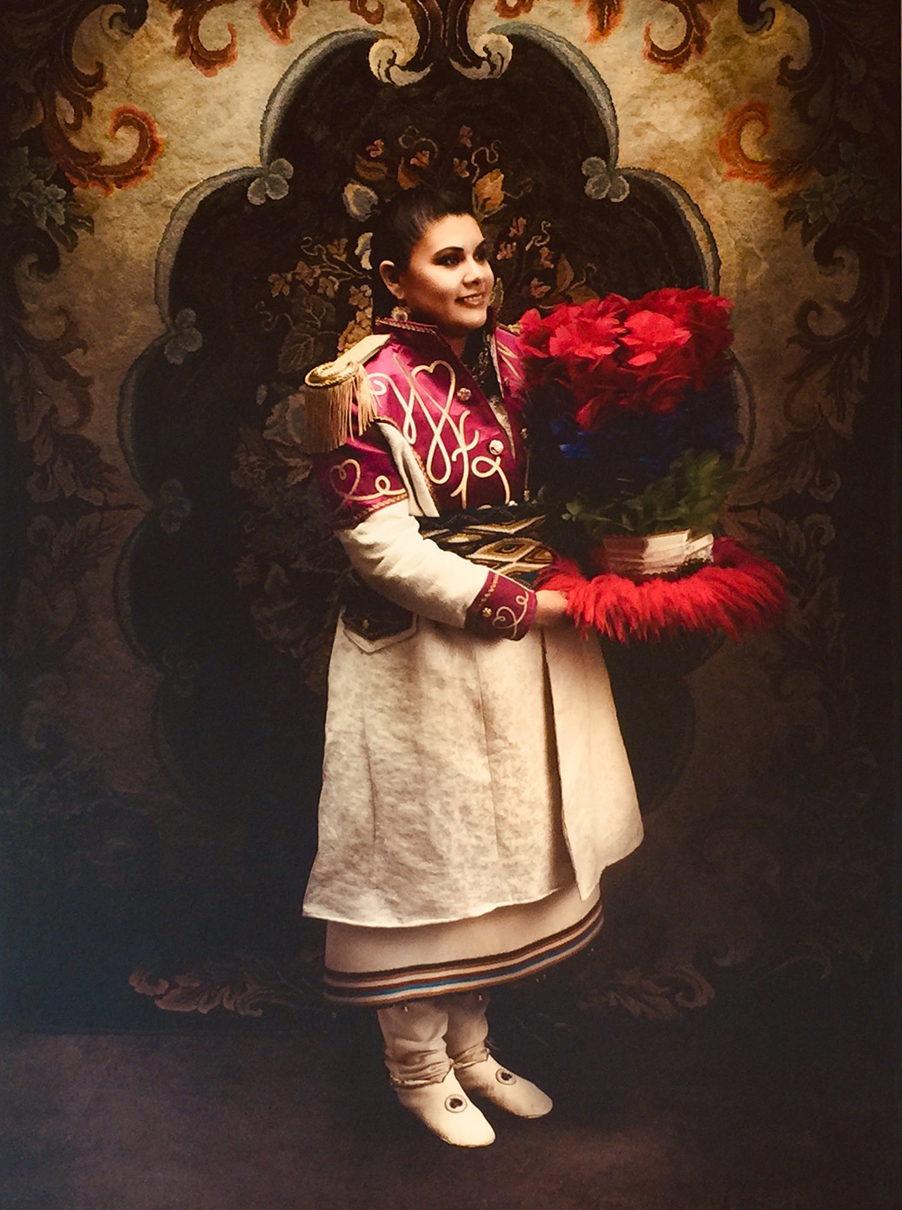 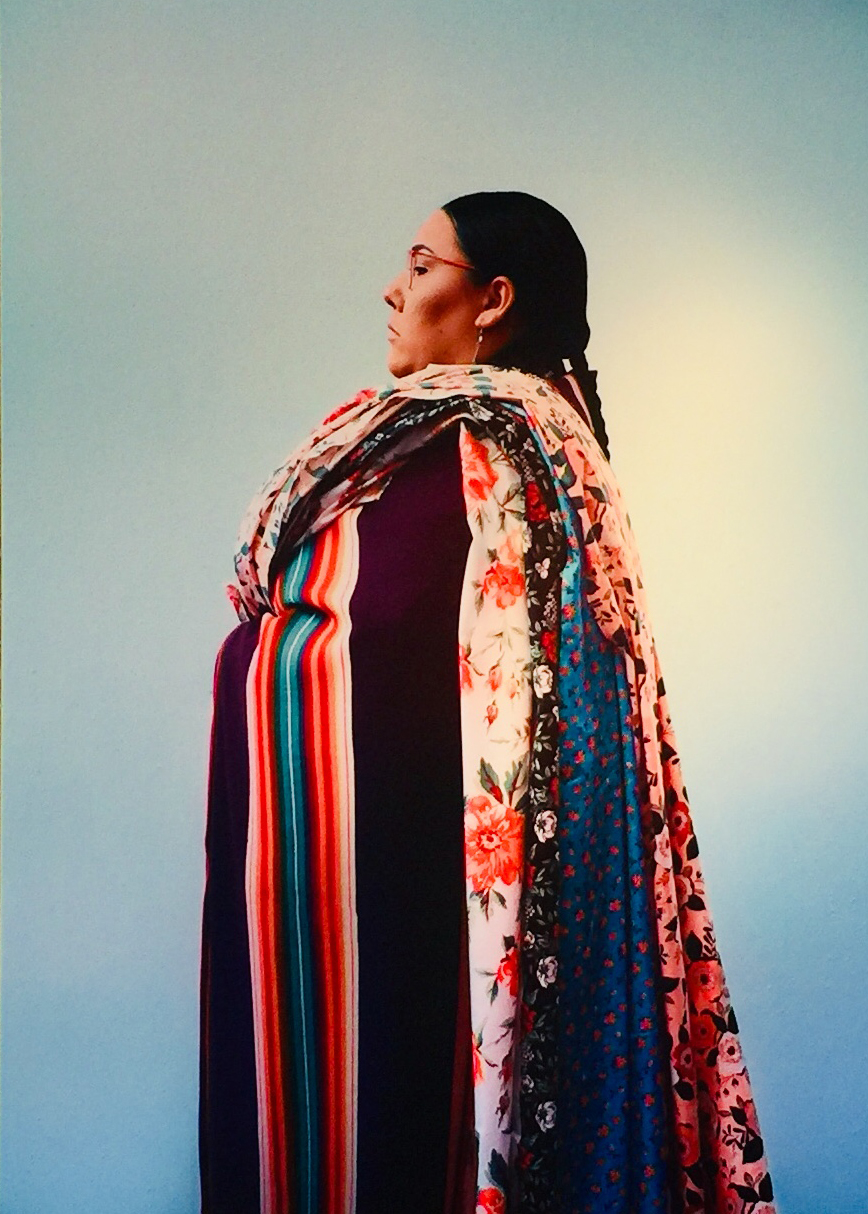 Excerpt from The Washington Post, “Putting Osage women in control of their own images” By Thomas Ryan RedCorn, November 21, 2018:

“Photos like these of Osage women have a complex history.”

“Like many Americans, Osage women in Oklahoma in the early 1900s loved to put on their best clothes and have their portraits taken. The photos were a nice gift for family or descendants and an expression of self-respect that attacked prevailing American attitudes about indigenous people. But the practice quickly went bad.

“After being removed to northeast Oklahoma in the 1800s, Osages had negotiated themselves into an advantageous position. Oil was “discovered” on their land, and by the 1920s, Osages were the wealthiest people per capita on the planet. But as American “discoveries” so often go, murder followed — hundreds of murders. Osage women were the primary targets of unscrupulous white men.

“Portraits of Osage women like these were created by local photographers. Merchants would sell the photos to white men to track down wealthy Osage women. They would proceed to court and marry an Osage, then kill her relatives so she would receive an inheritance — and then kill her, too.

“The Osage Nation paid the fledgling FBI to come investigate, trying to fight corruption of local, state and federal government in Oklahoma. Only two white men went to prison. The vast majority of the killings would go unsolved.

“While the FBI was impersonating heroes, Osage women protected themselves and their families, holding fast to values that came before them and still exist today.

“Osage men and women looked after my grandfather when his father was killed in 1931, well after the FBI “solved” the crimes. Those relatives, despite being targets themselves, gave my grandfather the tools and values that he used not only to survive, but to laugh his way to 94.

“To this day, non-Native photographers are sent to Native communities to ‘document.’  The relationship between indigenous people and non-Nativephotographers is at best strained, and at worst, gratuitous, invasive, repulsive and deceitful. America loves photos of Indians (usually old photos), but everyone loses when the country sees and hears only images and stories that reinforce disappearance, poverty, silencing and voyeuristic othering of our ways.

“My collaborative approach for these portraits respects the person, the space, the voice and the time the photo is being taken. Through this lens, these women’s voices and values emerge. These values have always been central to the Osage community. They carry with them respect, generosity, fairness, adaptation, prayer and humor…These women don’t dress this way on a daily basis, but it’s their representation, their choices. The representation of self is itself an Osage value. And the fact that those ideas survive and thrive is its own hero story.”

“The big picture idea is we’re…creating something new to combat the established media, rather than simply criticizing it…Take a visual inventory of Native images—which you can do by just running a Google image search on ‘Native American.’ That will tell you what images recur and what images rank highest. And what you see is that Curtis really controlled, and still controls, that image. And his pictures are really good; they deserve to be celebrated…But they shouldn’t dominate our idea of how Indians look or who they are… We need to add more of our own images to compete against Curtis’s. We have to be aggressive about it—my attitude has always been, create, create, create. Create more and better art and you’ll take up more bandwidth and tip the scales.”

Ryan RedCorn was born in Tahlequah, Oklahoma into a family of preachers, salesmen and politicians which are all pretty much the same occupation. He is the ilonpa of Raymond and Elizabeth RedCorn, and the object of jealousy from his three younger brothers Jon, Alex and Studebaker, who between them have three masters degrees and two Phd’s. Ryan, however, took 6 and half years to get an art degree in visual communications from the University of Kansas. To the surprise of many, Ryan has been able translate his education, his ilonpa entitlement, and his family lineage into something some people think is valuable. Sometimes people laugh at him for co-founding the Indigenous comedy troupe, the 1491s, and Buffalo Nickel Creative ad agency, but he’s ok with that. He recently woke one morning and realized he was married and had three daughters. He remarked, “I live a crazy life” and promptly enrolled in an MFA in screenwriting program to test his capacity for stress.