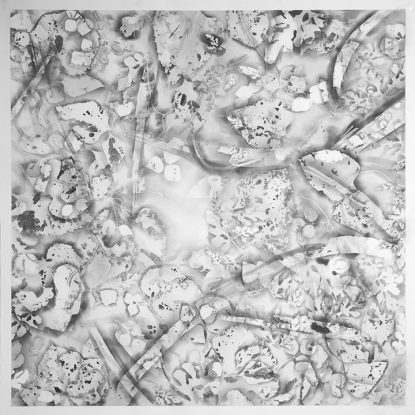 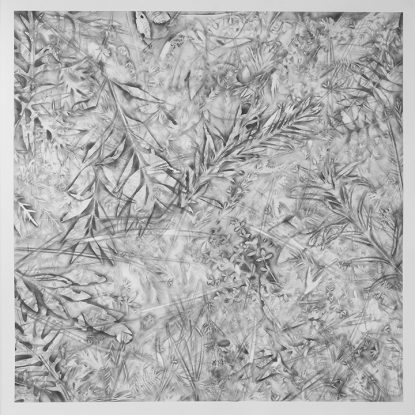 The Square Meter Series was created during a residency at The Land Institute, Salina KS.

An early project of The Land Institute carried out by Wes Jackson and Terry Evans (and others) involved isolating square meter sections of Prairie and meticulously documenting the diversity  of plant species within these bounds. The intention was to better understand the beautiful and complex system of the prairie and the way the plants interact. These drawings are an homage to that work. Parts of grasses, forms, and flowers from the Wauhob Prairie were gathered, dried, and pressed in the ancient tradition of plant collecting. The plant specimens were then delicately traced onto the paper by carefully dusting over each segment with powdered graphite, rendering it in a ghostly silhouette. Layer by layer, merging and overlapping, the square meter canvas becomes filled with a dense mat of the memories of individual plants. This same process was used to interpret a Four Sisters Garden planted in collaboration with seed-keeper Taylor Keen and cared for by Research Resident Abbi Han and other Land Institute staff, residents, and interns. 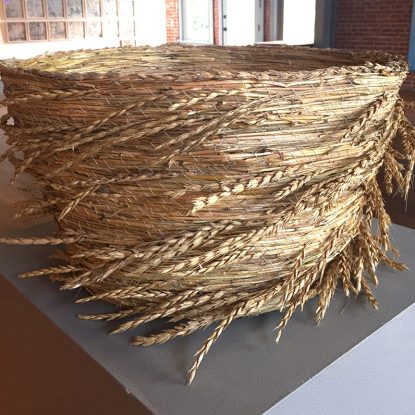 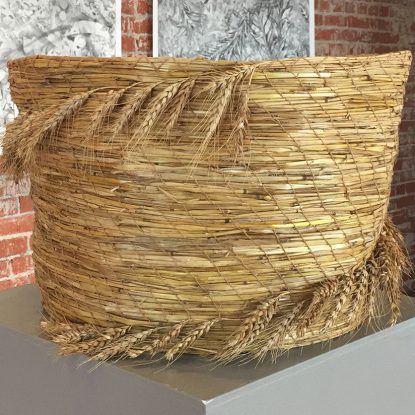 At one time, grains and other agricultural products were measured by the amount that could be stored, carried, and transported in a bushel basket or sack, a volume of roughly 8 dry gallons. With the industrialization of agriculture the unit of the ‘bushel’ was redefined to represent a unit of mass or weight specific to each commodity, rather than its volume. Despite layers of abstraction the unit of the ‘bushel’ harkens back to a time when agricultural practices were more closely related to the pace of the human body.

These woven forms are made in an effort to understand, visualize, and embody this unit of measure in relationship to both annual and perennial wheat. Through the process of their making, I become more familiar with the plant itself. Weaving is a way of knowing the plant’s physical structure, form, texture, scent and color as well as its limits and capacities such as the tendency to bend, break, or shatter.

The daughter of a soil conservation technician and a ceramicist, I grew up in the post rock region of central Kansas, just south of Russell. I had lived in three limestone houses by the age of six and spent most of my childhood on my family’s 10 acres in the country surrounded by farmland and a creek tributary to the Smoky Hill River. This place and all its varied complexities, from the native plants and grasses to the neighboring monocrops and their worn soil, the deep horizons dotted with oil wells to the powerful thunderstorms, the snakes skins found beneath stairs to the fossils in our limestone walls- continue to influence my work and the way I understand material, time, and the more-than-human world.

Rena Detrixhe is an interdisciplinary artist currently based in Salina,KS where she is working as a Research Resident with The Land Institute. Through objects and installations, ephemeral sculpture, performance, drawings, and process-based work, she explores systems of value and cultural relations to land and the more-than-human world with attention to histories of injustice. Her current research is focused on Midwestern agriculture as both an important cultural signifier, and a deeply troubled relationship to the land.

Her research has been supported by multiple grants and residencies including: a Serenbe Co-Esistere Residency, Stoneleaf Retreat, Tallgrass Artist Residency at the Konza Prairie Biological Station, a two-year residency with Charlotte Street Foundation in Kansas City, and a three-year residency with the Tulsa Artist Fellowship among others. Detrixhe’s work has been shown nationally and internationally;  recent exhibitions include Place out of Matter at Spencer Brownstone Gallery in NYC and In Times of Seismic Sorrows, at the Center for Craft in Asheville, NC. Detrixhe holds a BFA from the University of Kansas.