The gallery is temporarily closed until further notice

You may view the exhibition online here 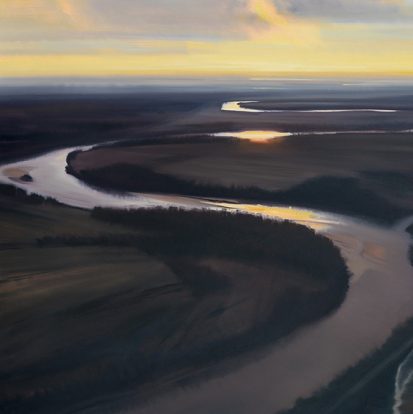 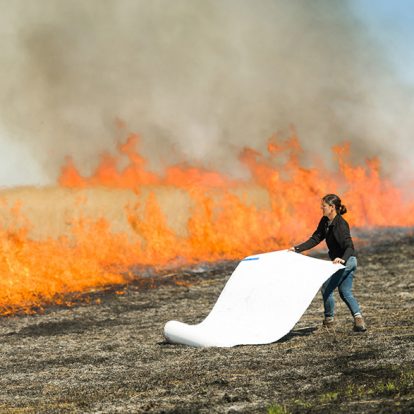 Two extraordinary artists working in the tallgrass prairie of the Flint Hills
will exhibit their work in an exhibition at The Volland Store Gallery in Volland, Kansas, opening Saturday, March 14.

LISA GROSSMAN grew up in rural western Pennsylvania and first saw a horizon when she moved to Kansas as a young woman fresh out of art school.  She has been painting the prairie ever since, minimal landscapes of rolling hills and big skies.   Around 2004 she turned her attention to the Kansas River, the largest prairie-based river system in the world. “I revel in the lyrical sweep of the Kansas River,” says Lisa. “Sandbars are part of its natural character and their ongoing transformation and the dramatic differences can be seen year-to-year, season-to-season, one water event to the next – even minute-to-minute.”  Lisa quotes the Greek philosopher Heraclitus,“You can never step into the same river twice…” and she continues, “we understand that the river is never the same, but neither are we….it’s a rich subject for me, alive with adventure and discovery.”  Several of her large paintings are included in the exhibit, along with a stunning installation of small panels in horizontal rows, intimate paintings that represent the entire 173-mile length of the Kansas River from Cedar Creek at mile 26.5 to the confluence of the Republican and the Smoky Hill Rivers at Junction City, Kansas.

ERIN WIERSMA creates works on paper on location in one of the few remaining protected grasslands in the world, the Konza Prairie.  Erin says, “I create a record of the land, using both bio-char produced from controlled burns and the embossing from the forbs, fauna and rocky terrain as they incise and transform the paper surface echoing the topography. Pulling, rubbing, dragging, pushing, and lifting — changed by the elements; wind, temperature, humidity, and landscape itself. “Paper offers an unparalleled medium to make process visible to the viewer. I create with the prairie; it influences my actions into large-scale works….As the prairie becomes both the subject and the medium, new landscape is revealed allowing me to know where I dwell.”

Both artists have exhibited extensively.

Lisa earned a BFA at KU and lives in Lawrence.  She has made a career of painting and printmaking since her first solo show in 1998 at the Dolphin Gallery, now Haw/Contemporary, in Kansas City, MO. Her prairie and Kansas River work has appeared in 30 solo shows around the country. Grossman is a 2019 Phoenix Award recipient, an honor from the City of Lawrence for artistic achievement. She’s an 8-time artist-in-resident in our national parks including a 2017 Voices of the Wilderness artist-in-residency with the US Forest Service kayak rangers in Tracy Arm/Fords Terror Wilderness in Southeast Alaska. She volunteers with local conservation groups, including Friends of the Kaw, and applies her work to their advocacy efforts.

Erin is an Associate Professor of Art at Kansas State University. She is represented by Robischon Gallery in Denver, Colorado and Galerie Wehlau in Munich, Germany, and her work has been featured in Minding Nature / Center for Humans & Nature, OnVerge / CUE Foundation, Art21 Online Magazine and Two Coats of Paint. Wiersma received her B.A. from Messiah College and completed her M.F.A. at the University of Connecticut.

and accompanying programs are supported by

The Volland Foundation
a 501c3 nonprofit