A Re-photography Exhibit by

based on vintage photographs of Otto Kratzer 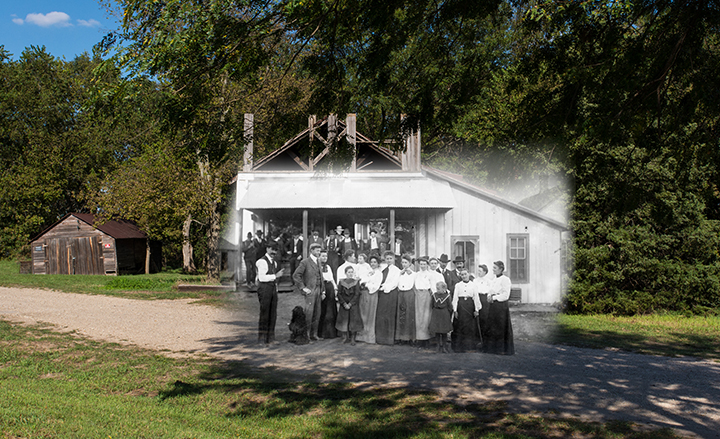 Original Kratzer Brother Mercantile, prior to 1913, re-photograpy by Tom Parish

OTTO KRATZER was storekeeper of Kratzer Brothers Mercantile from the early 1900s until the closing of the store at his death in 1971.  A self-taught photographer with a remarkable eye, Otto documented life in the vibrant railroad town of Volland for more than sixty years.  Many towns in Kansas grew up around railroad shipping points in the early part of the twentieth century, the heyday of cattle shipping by rail, and Volland was one of them.  Kratzer’s preservation of “this place in time” is arguably the most extensive documentation of a Kansas railroad town in the early twentieth century, particularly significant because most of those towns faded away after the industry shifted to transporting cattle by trucks in the 1950s.

TOM PARISH has worked with Kratzer’s photography for several years.  He restored many of Kratzer’s original photographs and made prints for the opening exhibit of the newly-renovated Volland Store in June 2015.  The exhibit was produced by historian Greg Hoots with the support of the local community and a grant from the Kansas Humanities Council.

Parish, an accomplished photographer noted for his views of Flint Hills arched-roof cellars, first created re-photographs of Volland while working on the “Going Home, Hidden Histories of the Flint Hills” exhibit in 2016 at the Flint Hills Discovery Center in Manhattan, Kansas. The exhibit, developed by the Chapman Center for Rural Studies at Kansas State University, highlighted the story of Volland and other “ghost towns” of Kansas.  Tom has visited the Volland Store many times and has stood in the places from which Kratzer made his photographs, making images of the site as it looks today.  Stitching Otto’s vintage photographs into the current landscape, Parish has created remarkable photographs and giffs that give a sense of the place as it existed in an earlier time within its present-day appearance.

You can almost see those folks walking around the grounds.

Many of the re-photographs have not been exhibited before.  Volland Then and Now celebrates the photography of Kratzer as well as the extraordinary talent of Parish – a stunning combination.  Tom Parish has created a significant body of work that makes a former time come alive.  You can almost see those folks walking around the grounds.