No mountains can be as beautiful to me as the far horizon, level as a floor, 20 or 30 miles in the distance. The sight fills me with a wonderful feeling of personal freedom, and also with a sense of infinity. Man finds his solitude here and in the still atmosphere cannot help but wonder about the nature of all being. – William Inge

in plain sight is an exhibition of three photographers – Doug Barrett, Laura Cobb and Dylan Connell – whose work reflects the people, places, and events they witnessed in Kansas. The exhibition’s title nods to the three photographers’ interest in highlighting often forgotten industries, people, and places. A through-line in the exhibit is how the artists, through the camera, create art that is visually captivating, yet honest and meaningful.

The exhibit celebrates the unique ability of photographers to share their viewpoints via the camera: meatpacking plant workers in a region with a strong ranching culture, a quarter mile of a tributary in suburban Kansas City, and Black cowboys and ranchers throughout the state. The human experience and impact are on full display in the exhibit.

Doug Barrett, based in Manhattan, is a syndicated photographer with editorial clients including TIME Magazine, National Geographic, VICE, and The Wall Street Journal, among others. Beyond assignments, Barrett launches his own projects, often revolving around veterans and African Americans. in plain sight shows work from Barrett’s ongoing work on Black ranchers and cowboys in the state. In his research, Barrett realized there is a much larger population of Black ranchers and farmers than he, or the state, recognized. The project, in its nascent phase and aided by two grants awarded to Barrett, will see the artist travel the state to document as many Black agricultural workers as he can. 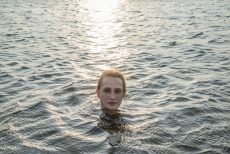 In Laura Cobb’s 400 Meters and Infinity along Indian Creek, the photographer shares Barrett’s methodical approach in a landscape setting. Focusing on a quarter mile of Indian Creek in Overland Park, Cobb reminds us wilderness can be found close to home, even in suburban sprawl. Returning to the site over two years, under different seasons and circumstances, Cobb emphasizes Indian Creek as a place in constant flux. The artist is truthful in sharing her subject, balancing photographs of an apparently pristine body of water with ones focusing on the human impact. 400 Meters foregrounds themes of movement and time in a striking way. Long exposures hint at passing time and repetition, while animal imprints in the mud crystalize a singular moment. While the water in Indian Creek is transitory, the oil and plastic goods Cobb found will last for lifetimes in the watershed unless fished out. Cobb is finishing her MFA in Photography at the University of Nebraska this Spring; she is a graduate of the Kansas City Art Institute. 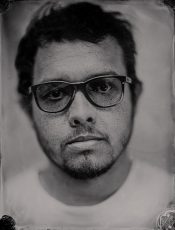 Dylan Connell, who graduated with a BFA in Photography at Kansas State University in the Fall of 2022, documents meatpackers in his Smithfield Foods series. Connell creates high-fidelity portraits of workers donned in their work attire. The subjects, identified in the titles by their employee identification number, were in fact Connell’s co-workers. Careful use of light and shadow focus the viewer’s attention on the workers’ faces which lack emotion. This view of Smithfield Food workers is one that we are not supposed to see as photography inside the plant is strictly prohibited. When possible, Connell asked his subjects to come to the studio immediately after work to accurately capture the strain of a long shift. Connell’s deadpan approach strips the subjects of their personality, their uniform shielding the viewer from clothing choice and hair, their names left for us to wonder. The anonymity Connell creates plays into the Flint Hill’s dominant culture of ranching where the front-end work, although difficult in its own right, is celebrated and romanticized, eclipsing the processing workers.

Ryan Jones is Director of Operations at The Volland Foundation.  He is a 2019 graduate of the University of Kansas, with a double major in Art History and Microbiology.

Ryan joined the Volland Foundation first as a volunteer, then an intern, and in August 2021, he was named Operations Director. Ryan previously held volunteer/intern roles at the Washburn University’s Mulvane Art Museum, the Philadelphia Museum of Art, and the Spencer Museum of Art at KU.

This is Jones’ first exhibit as curator at Volland.