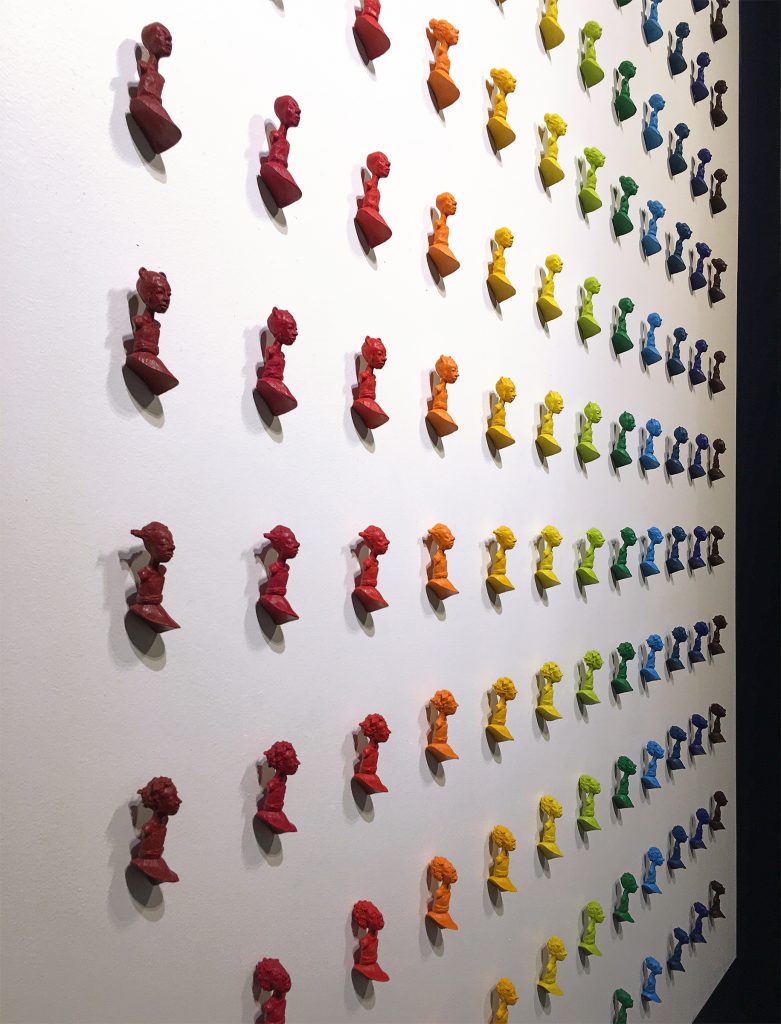 “Spectrums Within Under Our Skin” is 144 girls made from Crayola Crayon.
There are 12 different girls, each girl is made from the 12 colors I see when I look at the color spectrum. I wish we could see the light within us all and the variations that make each of us that light passing through a prism showing the many spectrums within us all. We are more than a classification in terms of a position between two extremes, we are all the colors and an untold number of possibilities.

The way we see others and how one is seen has been a subject that I have had in my life since I was small. I am both Native American and Caucasian, but growing up I felt more times than I care to count that I was not enough of one or the other and that pull made me question all parts of myself. If I did not look like_____ could I be ______? Where did I fit if I was not a part of this or that group?

I have had conversations with many that are from other races and that too was
a struggle as well. Is my skin too dark or not dark enough, the texture of my hair or the accent that I speak with? All of this history, this past came to a head one day while getting my children ready for school we were pulling together pencils, folders, colored pencils, and crayons. They had to have 4 sets of 24 crayons each and we had leftovers from sets of the past years, some colors had never been used, and we were combining them together so we’d know how many new boxes would be required. The kids were talking about their friends at the new school and friends of their past school. In the conversation, they were describing the children “the girl with the yellow hair, the boy with the brown skin”, in a very casual descriptive manner with no malice to the differences.

This made me think more about how we see people and how one is judged. The smell of the crayons, the vivid colors, and the thoughts of my youth brought me to this crayon project. How we change in our viewpoints of people, and how we judge people based on race and color. We are all one below that surface, that surface of skin, no matter the color, the shape, or the origin. I think if we could see ourselves as all the colors in the crayon box in all the shades we would be kinder we would be able to feel if just for a moment another’s life and our world could change in such a way that kids don’t worry about if they are too light or too dark or if their hair is the right texture to belong.

Multi-media artist Holly Wilson creates figures which serve as her storytellers to the world,
conveying stories of the sacred and the precious, capturing moments of our day, our vulnerabilities and our strengths. The stories are at one time both representations of family history as well as personal experiences. Wilsons work reaches a broad audience allowing the viewer the opportunity to see their personal connection. Wilson works in a variety of media including bronzes, paint, encaustic, photography, glass, and clay.

She has been exhibiting her intimate bronzes, photography, and encaustic relief paintings nationally and internationally since the early 1990s. Additionally, her works are in corporate, public, and museum collections throughout the United States, as well as national and international private collections such as; The Heritage in Oklahoma City, The Central Library in downtown Tulsa Oklahoma, Virginia Museum of Fine Art, the C.N. Gorman Museum, The Eiteljorg Museum of American Indians and Western Art, The Heritage Center at Red Cloud Indian School, and the Nerman Museum of Contemporary Art.

Wilson has received recognition for her artwork through her inclusion in important exhibitions, most recently “Art for a New Understanding: Native Voices, 1950s to Now” that opened at Crystal Bridges Museum of Art. Wilson’s work has also been included in exhibitions such as “Hear My Voice: Native American Art of the Past and Present,” a traveling exhibition from the Virginia Museum of Fine Art in Richmond, Virginia. She was chosen to represent Oklahoma in the Museum Exhibition “Four by Four 2016: Midwest Invitational” at the Springfield Art Museum in Springfield, Missouri and “Expressions of Spirit” at the Wheelwright Museum of the American Indian.

Wilson has received many awards, grants, and fellowships for her evocative sculptures, including a 2017 SWAIA Discovery Fellowship from the Santa Fe Indian Market and a 2015 Eiteljorg Fellowship from the Eiteljorg Museum of American Indians and Western Art. Currently, Wilson has a solo exhibition, “On Turtle’s Back” at Dunedin Fine Art Center, Dunedin, Florida till Dec. 23, 2019.

Holly Wilson of Delaware Nation and Cherokee heritage is now based in Mustang, Oklahoma. In 2001 she graduated with an MFA in sculpture and in 1994 she earned an MA in ceramics both from Stephen F. Austin State University, Nacogdoches, Texas; she received her Teaching Certification in K-12 Art from Cameron University in Lawton, Oklahoma, in 1993; and in 1992 she finished her BFA in ceramics at the Kansas City Art Institute.