… the infinite sum of dreams, made possible on a stage
by stories, breathed from a page. 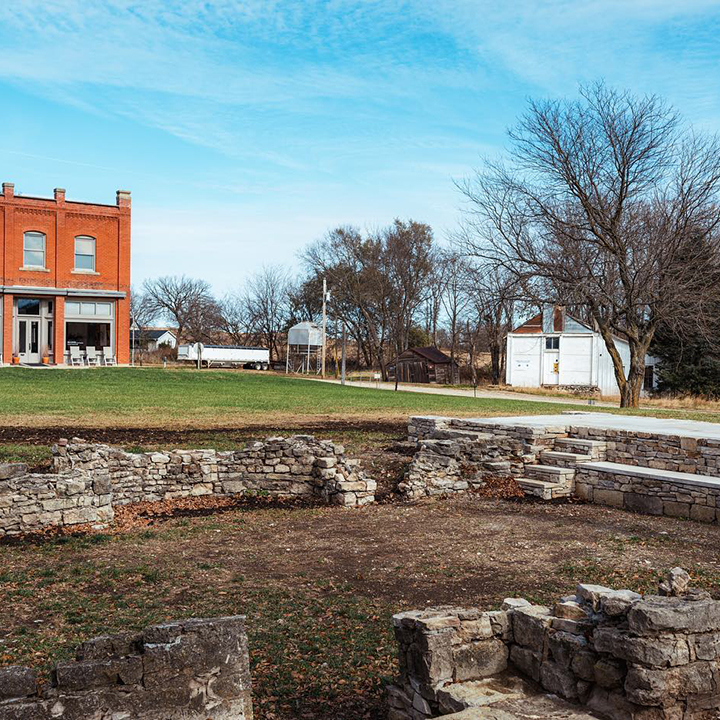 “The Ruin” Photo by Dylan Connell

After collecting stories, creating a script, and weeks of rehearsals and construction Heart/Roots: Wabaunsee County is ready for opening night. The curtain will rise – so to speak – at the Ruin on June 17 & 18. Enjoy an evening of authentic stories at the new and unique venue. Mary Pinard and Beth Wynstra  gathered stories old and new from Wabaunsee County residents in late 2021. The result? A cross-section of the County spanning time, region, and backgrounds. Stories of disaster, the land, community and more meld together, acted by Flint Hills residents.

FROM HOUSE TO RUIN

In a play focusing on stories, there’s one to be told about its venue. Before it was the Ruin, the stones formed the foundation of Otto Kratzer’s brick house in Volland. The handsome house, built in 1917, faced Otto and Bill Kratzer’s mercantile, the heart of Volland then and now. Behind it the railroad tracks. The railroad is integral to Volland’s story. The Rock Island Railroad laid six lines and built a depot in Volland, adding to the area’s offerings. Volland’s Little House (up Volland Road) was purchased in a catalogue in the mercantile, and brought by the train. The materials for Otto’s house were likely brought by the train too. Cattle were let off in Volland to go to pasture, contributing to the local economy. Just as the train birthed Volland, it supplied unforeseen consequences. Twice the train derailed near Volland, once in 1893 and again in 1920. In 1907, two trains collided two miles west of Volland, killing 32 passengers, and injuring another 40. The train also erased Otto’s house. One fateful day in 1929 at 10 in the morning, Otto’s house caught fire. It is believed a train cinder blew over onto the roof of the house. The Kratzers made it out and community members did all they could to save the structure. (Rumor has it one man retrieved the family’s cast iron tub from the burning house singlehandedly!) Their efforts fell short however, leaving a ruin in the house’s place.

Fast forward over nine decades, and the Ruin reimagines what the space marred by the train can be in this century. The goal for the Ruin was to repurpose the space, while honoring Otto’s original plans. “Don’t ruin the Ruin” was the project motto.  Mike Lillich and his crew at Perfection Masonry brought the Ruin up to usable standards, adding steps, a stage, and shoring up walls, all while keeping the character of the site. John Whitaker added electricity to the Ruin, making it possible to host events in Volland’s newest venue. We look forward to launching the Ruin with Heart/Roots: Wabaunsee County and using the site in a multitude of ways in the future. Thank you to the many supporters who contributed in the designing/building effort: Don Hendricks, Mike Lillich and Perfection Masonry, John & Casey Whitaker, Lynn Ewanow, Lorn Clement, Susanne Siepl-Coates, George Terbovich, Cathie Lavis, Jeff Frank and Boys, Beth Wynstra, Mary Pinard, Randy Wolf, John O’Brien, Al Berman, Kirk Hutson, Patty Reece, Jerry Reece.

To all those who through the years were drawn to the Ruin to dream, imagine, be married, and play – you inspired us to reimagine the space for others to continue to enjoy in many ways.

We extend our gratitude to the storytellers for Heart/Roots: Wabaunsee County. Their generosity and openness to the project inspired the group and generated this distinctly Wabaunsee County play. 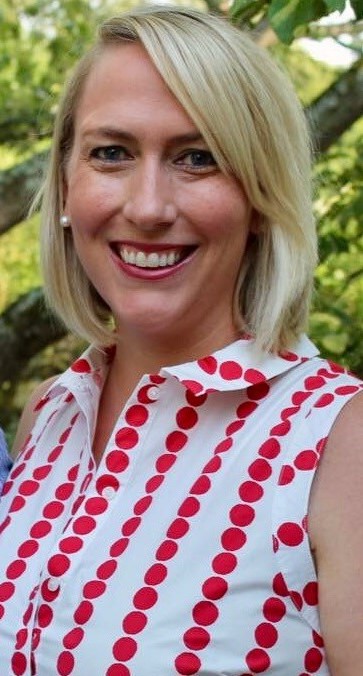 Beth Wynstra is an Associate Professor of English at Babson College. She holds a Ph.D. in Theater Studies from the University of California at Santa Barbara and a certificate in Directing from the Yale School of Drama. Beth’s book, “I Only Act a Part You’ve Created”: The Performance of Marriage in the Plays of Eugene O’Neill (University of Iowa Press, Theater History and Culture Series) will be published in 2023. Beth has written extensively on the life and plays of Eugene O’Neill and often works as a dramaturg with professional theater companies around the country who are producing the works of O’Neill. Beth regularly directs plays and musicals at Babson and is the Founding Artistic Director of The Empty Space Theater. She is honored to be working with the Volland Foundation, the talented cast and crew, and with her extraordinary friend, mentor, and colleague, Mary Pinard, on Heart/Roots: Wabaunsee County.

Mary Pinard is a poet and teaches literature at Babson College in Wellesley, MA. Her poems have appeared in a range of literary 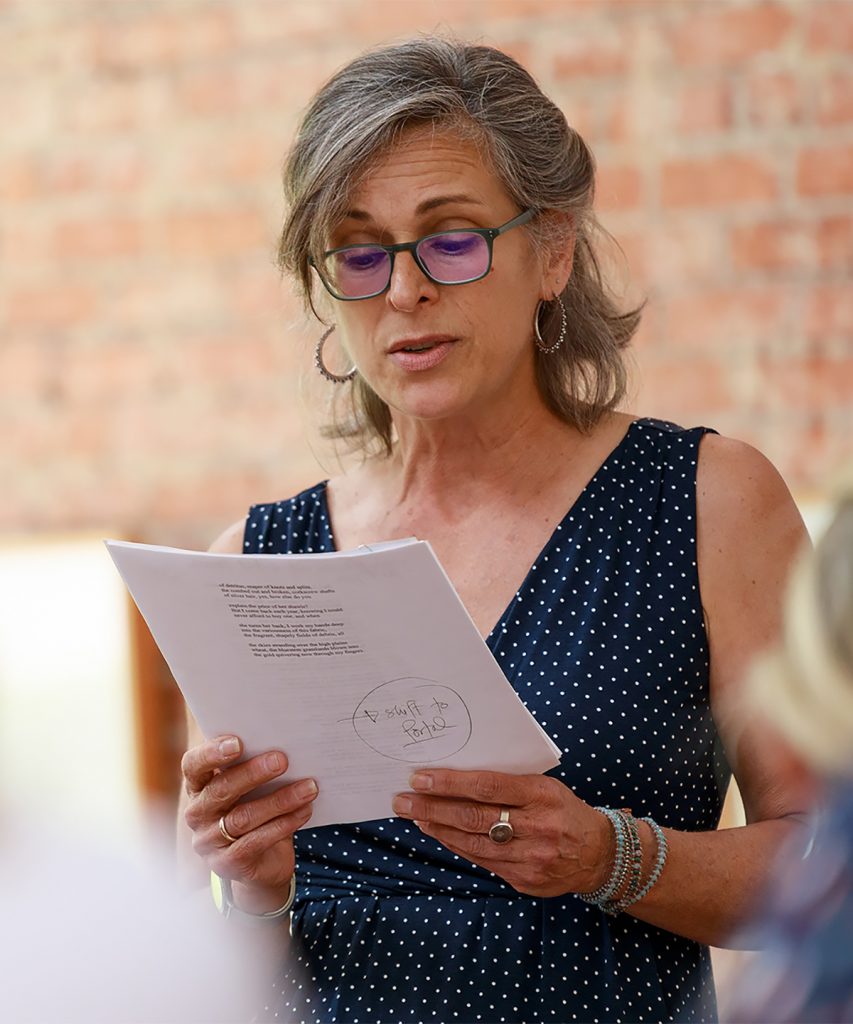 journals, and her first book of poetry, Portal, was published in 2014 by Salmon Press.  Her second book, Ghost Heart, which contains poems about her beloved Flint Hills, is forthcoming later this year.  She was born and raised in Seattle, and Heart/Roots: Wabaunsee County is her first play. 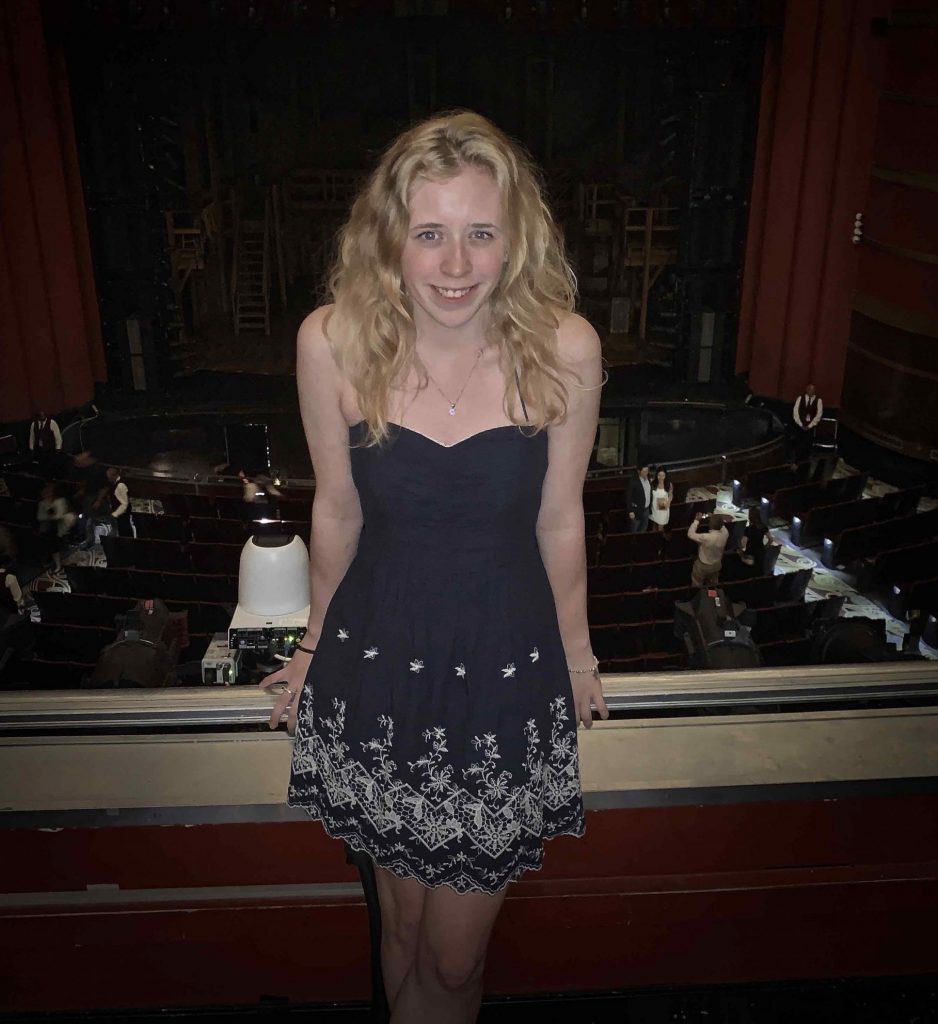 Janelle is thrilled to be the stage manager for this production! She’s currently finishing her higher education at K-State where she is pursuing a degree in theatre. She spent the past year stage managing productions at K-State and working as the front of house manager at McCain Auditorium. She currently resides in Manhattan, KS, but has plans to move to California later this year. 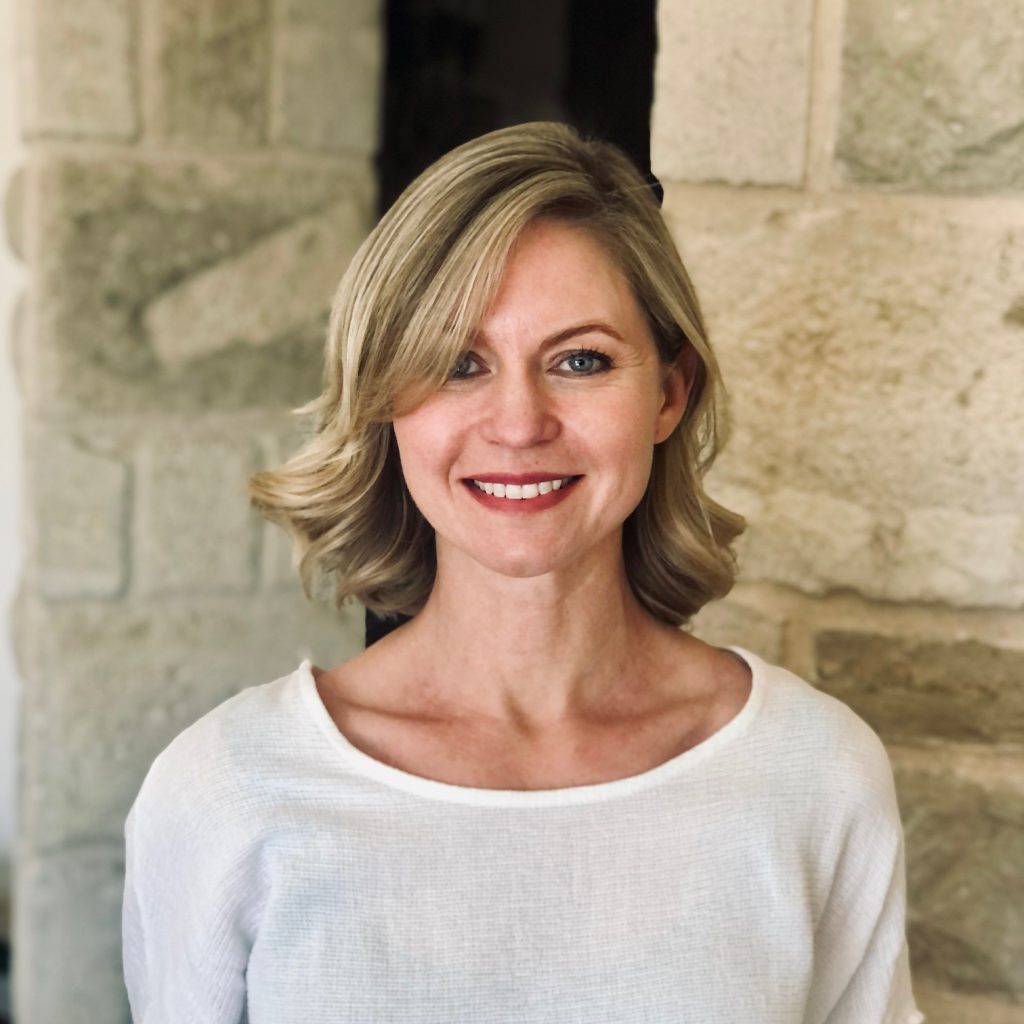 Heather Beggs is a Salina, KS native, and recent transplant to Wabaunsee County from Kansas City.  Having found the “sweet life” here, Heather’s work is in health and happiness optimization through mindfulness practices such as yoga, breathwork, meditation, community events, and eco-conscious, handmade products.  Her last theater experience was in 10th grade as a nun in The Sound of Music.  Heather is delighted to be part of this first production at the Volland Ruin for the way it ushers in ever-more interpretations of the singular beauty of Wabaunsee County’s people and places. 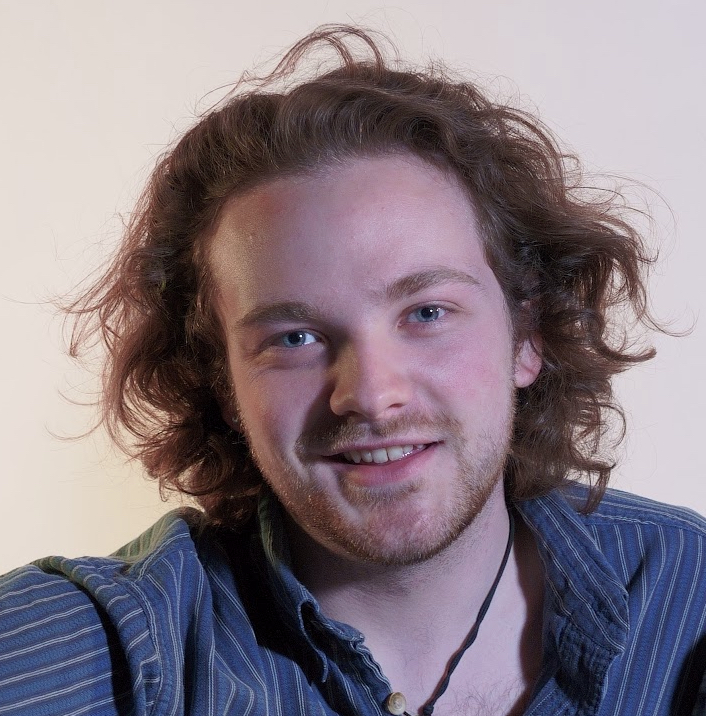 Jackson Berland is a Senior at Kansas State University studying theatre, film, and anthropology. Jackson spends his time in college creating short films with friends, diving into new stories, and hosting his weekday morning show on the radio. Jackson grew up in Lawrence pursuing theatre from a young age. In moving to Manhattan for college, Jackson found a deep love for the Flint Hills which is why he feels so privileged to be a part of such a special story. 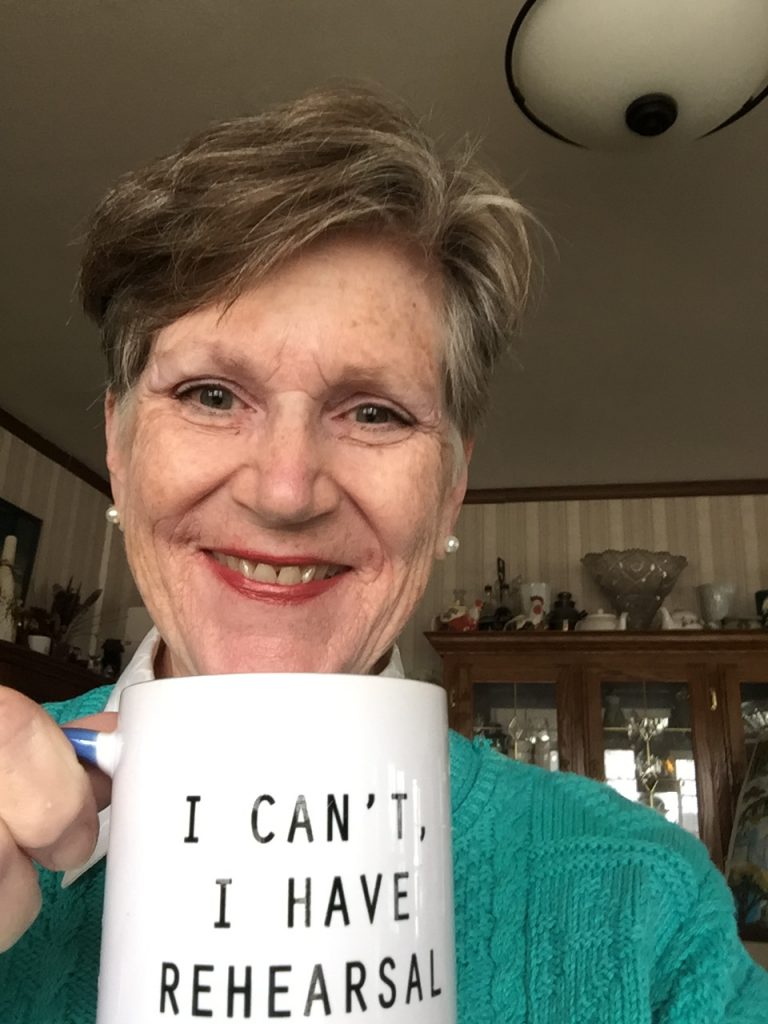 Candy Boardman is returning to the stage after a brief, 53-year hiatus. (Since her return, she’s discovered that her portrayals of older characters seem to have taken on a bit more credibility than they did in 1969.) After falling in love with the quiet beauty of the Flint Hills, Candy settled in Council Grove 26 years ago—and has never left.  Now retired from Emporia State University, Candy continues to enjoy observing the complex and interwoven backstories of Morris and Wabaunsee County families and their ways of life. 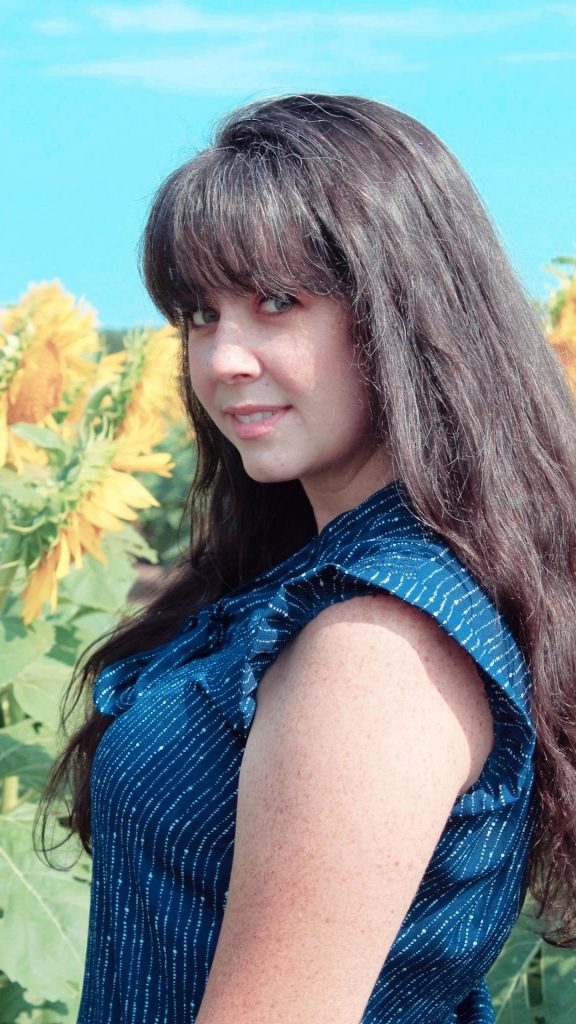 Briana comes from a background in performing arts. She’s performed in musicals such as My Fair Lady and West Side Story, and even used to perform as a professional mermaid out in the great islands of Hawaii. Briana is an EMT and is in paramedic training. She currently lives in Alma and often practices her singing for her two cats, much to their chagrin. 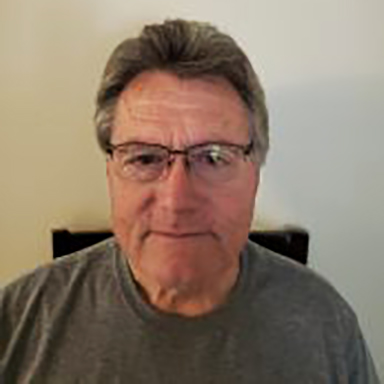 As a Wabaunsee County native, residing in Alma, Ks., Don Hendricks has spent many hours of community involvement. He has served on the Alma City Council as an elected official (1989-1997) and as Alma’s Mayor (1997-2005). Don is currently the chairman of the Wabaunsee County Planning Commission. His last acting part was in a high school play titled The Egg and I in 1969.  Don is a business owner in Alma. He and his wife, Rosa, have two daughters and five active grandchildren. 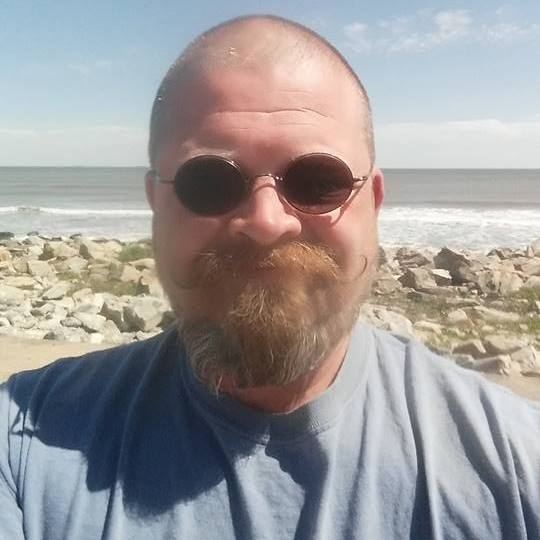 Brian Huntzinger has appeared in a few productions at The Columbian Theater in Wamego. You may have seen him in Oliver!, Annie Get your Gun, It’s a Wonderful Life! and A Tribute to Carol Burnett. Brian is a Paramedic/Captain with Pottawatomie County EMS where he has worked for 20 years. A native of Wamego, Brian has lived in rural Wabaunsee County (just a few miles from Volland) for the last 5 years. 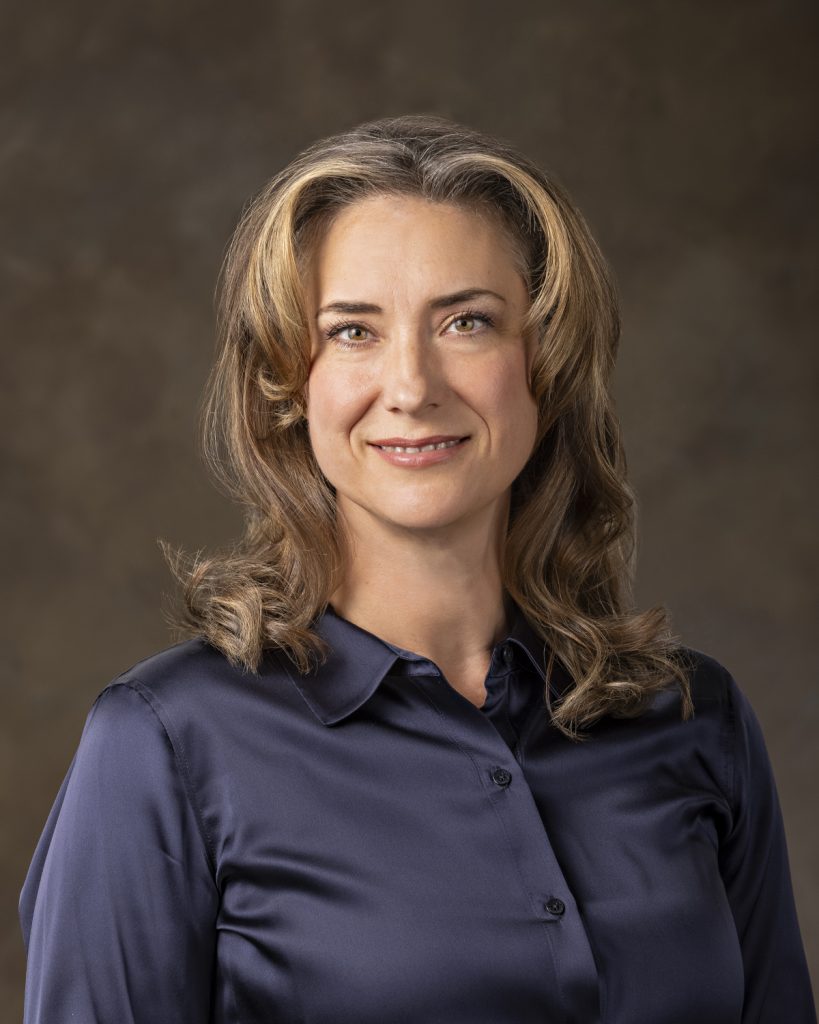 Stephanie Manes is a grassland ecologist with a passion for native prairies and the people they support.  She and her husband Rob Manes live near Wamego, Kansas, with their two children.  Stephanie is from Mannford, Oklahoma (the Southern Flint Hills!) but has travelled and worked extensively with ranching families to conserve land in CO, NM, TX, OK and KS.  This is Stephanie’s first live theatre performance. 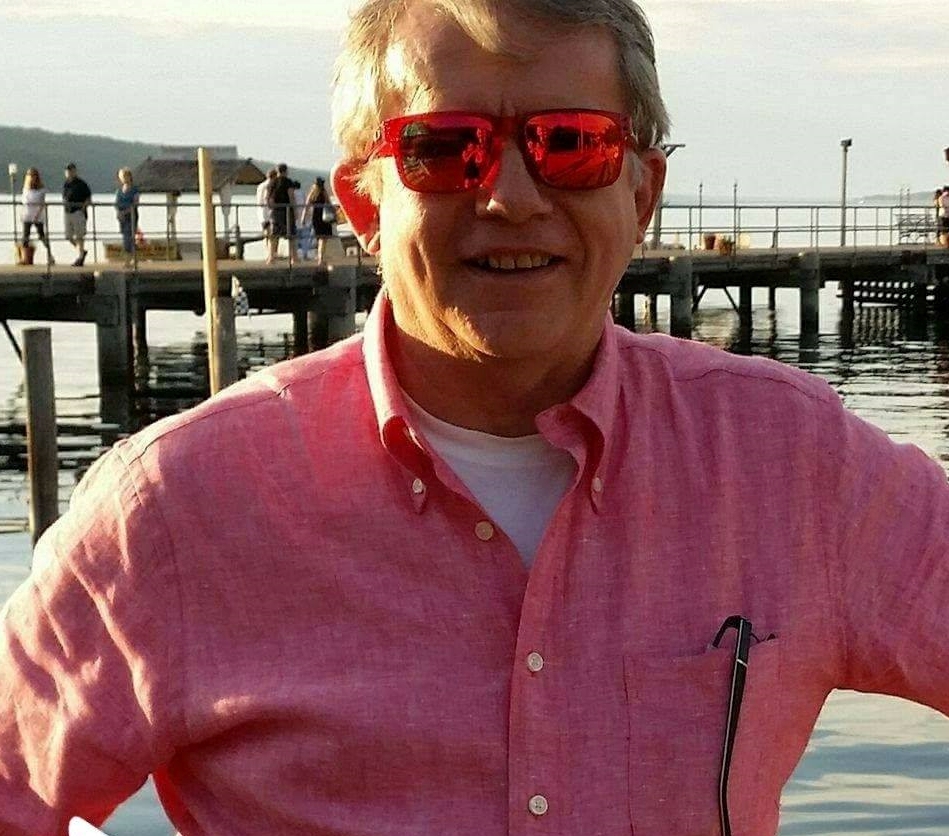 Blake Thomas is an eternal optimist, always looking for new experiences and challenges to learn something new.  His past has travelled through various career paths including riding horses professionally, computer technology, construction and parenting – kids, horses and dogs.  All of Blake’s life experiences should provide an excellent foundation for this, his first, theatrical experience.

Jenny Towns lives in Manhattan, KS, where she is an adjunct instructor in strategic communications and currently pursuing her M.M. in music education, both at Kansas State University. A native of Washington, DC, Jenny has performed as both an actor and a singer in theatres across the east coast, and was most recently seen in The Revolutionists (Olympe) at Manhattan Arts Center in Manhattan, KS (August 2021). She is thrilled to join the team at the magical Volland Foundation for this production. 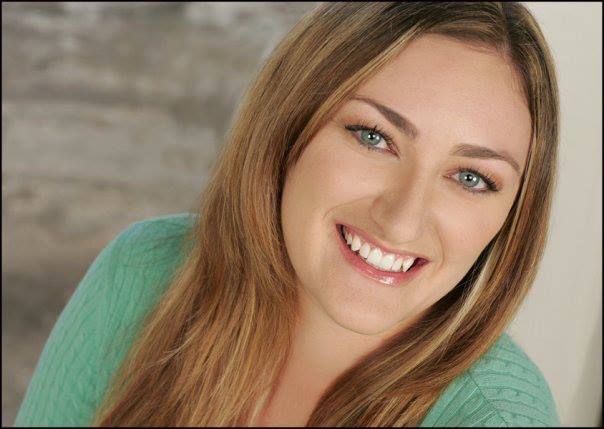 Heart/Roots: Wabaunsee County is the amalgam of countless stories playwright Mary Pinard and director Beth Wynstra collected and pored over. The two Babson College professors, Pinard in Literature, Wynstra in English, thoughtfully crafted a script, cast the actors, and rehearsed the play to produce Heart/Roots, utilizing the help of stage manager Janelle Augustine in the process. 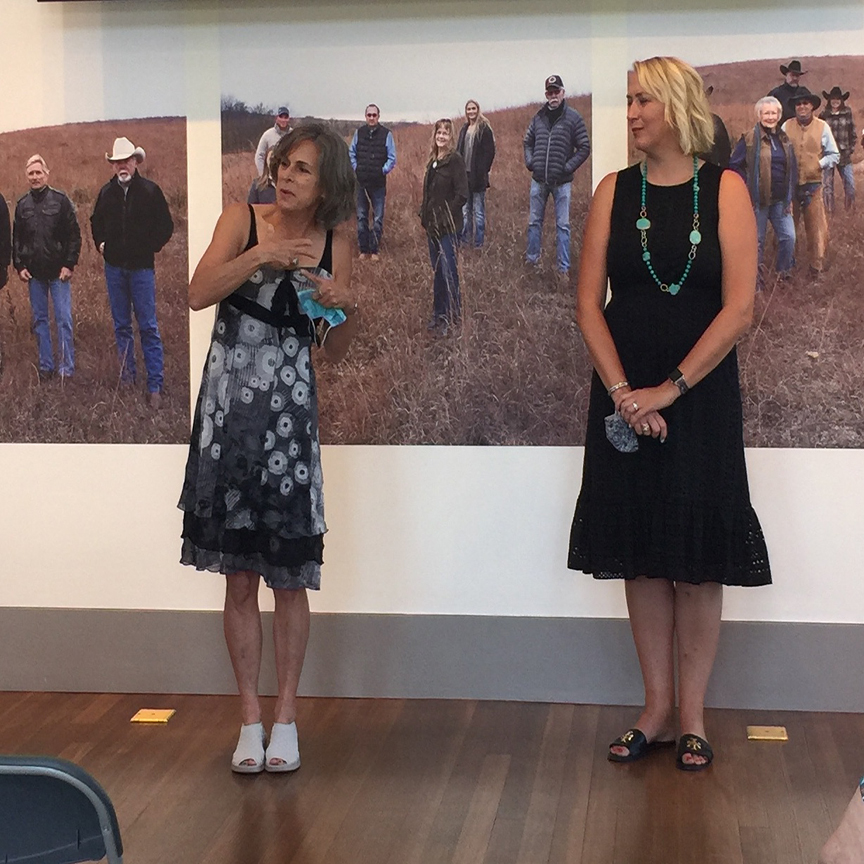 Mary left, Beth right during the launch event in August 2021

The Volland Foundation would like to thank all the supporters of this project. All of the Foundation’s members and donors played a critical role in seeing this project to completion.

Heart/Roots: Wabaunsee County received a Visiting Artist grant from the Kansas Creative Arts Industries Commission (KCAIC). We would like to extend our thanks to KCAIC for supporting this project.

We also extend our gratitude to Babson College, who supported the project by covering Beth & Mary’s travel expenses.