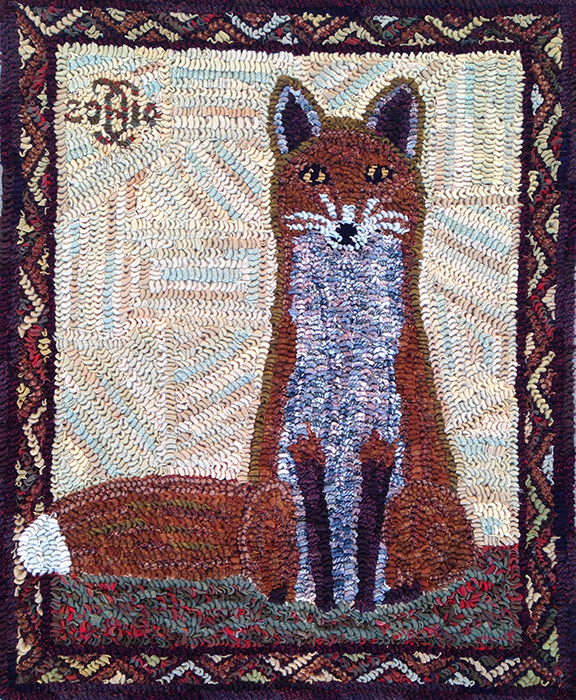 The work of Cecilia Evans Clement, who is known as Sheila, reflects her life to some degree.

In conversations with her daughter Cela Hennessy and son Lorn Clement, the story emerges:

Sheila to Cela:  “The history of rug hooking is somewhat elusive, but it is generally agreed that the craft came into use in this country around the 1850s.  Many households could not afford expensive imported rugs or carpets.

“So, the story goes, women began saving feed bags, particularly those made of burlap.  An individual would stretch one over a homemade frame and use it as the foundation for a rug. Taking a charred stick from the fire, she then drew the pattern onto the foundation and proceeded to hook. Perhaps with a bent nail she would hook the design with torn strips of fabric from old worn out clothes. In the old rugs one can usually find a wonderful assortment of strips ranging from old underwear and stockings to fancy taffeta dresses.

“Today we use mostly wool as it produces a rug that lasts the longest and, I might add here, will take the dye best if one is dyeing the material before hooking it. Originally rugs were the only things being hooked, but today’s modern ‘hookers’ are having fun creating a great variety of work featuring multiple fabrics and all kinds of ‘bells and whistles.’  Personally, I prefer to hook only rugs and perhaps an occasional pillow using wool fabric torn or cut into 3/8th inch strips.

“After I retired from being a nursery school teacher, my husband and I moved to an old farm house in the lovely countryside of southeastern Pennsylvania. Although the house was in Chester County, home of many avid fox hunters and owners of race horses, we were right next to the county line of Lancaster County, well known for its Amish population. Hence we were considered as part of the ‘mink and manure’ set.

“Not long after moving in I found myself one day reading a magazine article about Marian Ham, a well-known rug hooker and teacher. I realized these hooked rugs would be the perfect answer for floor coverings for this old house. I had always been interested in doing needlework of various kinds, but I had never tried hooking. I found a teacher, Bettina Maraldo, in Kennett Square about twenty minutes from our house and as they say ‘the rest is history.’  She taught me to hook and within a year or so we formed a partnership and operated out of the studio in my house.  We had many students, repaired old hooked rugs, and hooked commissions. We attended workshops and had our own rug hooking group which met once a month.

“A large part of my portfolio consists of rugs commissioned by friends and family for their summer camps up on the Canadian north shore of Lake Huron.”

Sheila’s son Lorn notes that the family summer camps have been a big part of Sheila’s life, as well as the lives of her family and friends.  He states:  “There are a dozen camps associated with her relatives at this point.  Fifth and sixth generations for several families return to ‘summer’ on the islands and mainland of this area each year.”

Back to Sheila: “There is a history of old rugs in the area, created by Ojibwe Indians, that were collected in the early twentieth century, and I have had many requests to design and hook new rugs with ‘my take’ on the old designs.  Also, I’ve had requests for rugs featuring summer camps, boats and other aspects of our time spent in this beautiful area. In addition to the Canadian rugs in my portfolio, over the years I have hooked many geometrics and florals as well as landscapes. In many cases again, I have completed a special request for a client or perhaps just an experimental design for myself.

Although difficulties with eyesight may prevent her from making more rugs, Sheila is leaving a wealth of knowledge with the students she has taught and plenty of memories for family and friends in the rugs she has created.  No doubt, for future generations to cherish.

Mrs. Clement’s rugs have been exhibited at the Grassroots Art Center in Lucas, Kansas.  She now resides in an independent living unit at Via Christi Village in Manhattan, Kansas.  She will celebrate her 90th birthday on March 3, 2018. 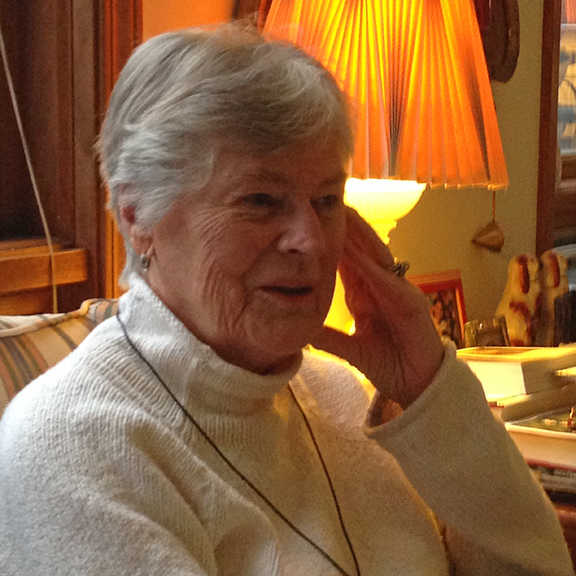