at the Volland Arena 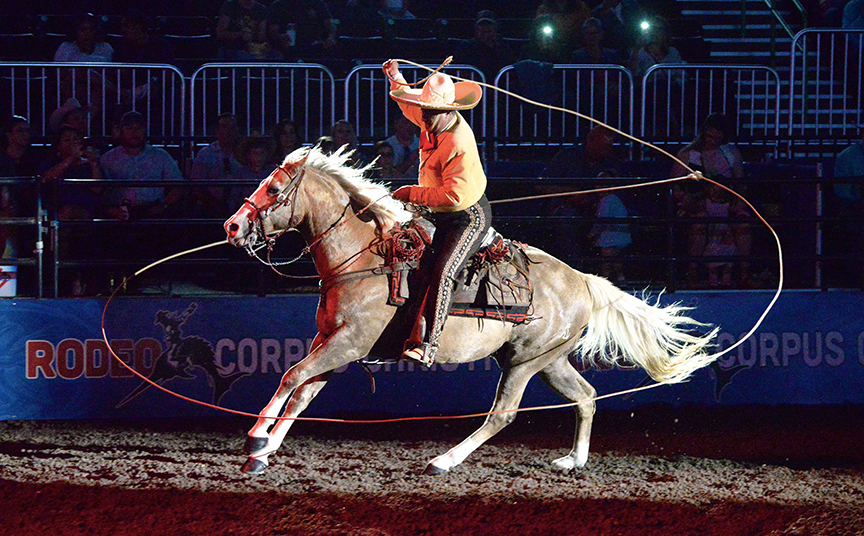 8:30 | Visit with the Diaz family and their amazing Andalusian horses

at the (new) Volland Arena

Wear your boots and bring a lawn chair

GERARDO “JERRY” DIAZ, “Superior Horseman,” comes from the world of Mexican horsemanship and rodeo. A true charro, Diaz follows the grand tradition of his Mexican heritage. The charro’s strict code of honor includes chivalry, high ethics, expert horsemanship and dedication to family and charro traditions.  Jerry Diaz embodies all of these qualities. He is four times World Champion Charro and has earned the Federation of Charros’ Golden Spur Award for his outstanding contributions and his commitment to the charro tradition.

Since beginning his career in the early 1980s, Jerry Diaz has performed his horsemanship skills & rope artistry around the country. Unaided by swivels or gimmicks, he spins the rope with ease while on foot, riding, or standing atop his horse. Jerry made a special appearance before US President George Bush and British Prime Minister Margaret Thatcher, and he performed at Madison Square Garden and at the Olympic Games in Atlanta.

Showmanship runs in the Diaz family.  After taking up residence in the United States, his father Jose “Pepe” Diaz, was featured in the Barnum & Bailey Circus. Jerry’s wife Staci is an accomplished horsewoman, known for her Roman riding skills. Their son Nicolas, a superb horseman, performs alongside both his parents in many of the productions they do as a family.

Jerry Diaz has appeared on PBS’s National Education Services, ABC’s “Good Morning America” and many episodes of Telemundo and Univision. He’s been written up in the AQHA Journal, Time, and Newsweek. He was inducted into the Texas Trail of Fame, Cowboys of Color in Fort Worth, and Texas Cowboy Hall of Fame.  Jerry is well known for his Superior Horsemanship skills. He and his family now reside in New Braunfels, Texas, on a horse ranch where they raise and train all their own show horses.  He is a spokesperson for the Company HW Brand Heavy Duty Brown Lienzo Arena systems.  For the past 23 years he has been a Purina Mills Influential and is now serving as an Ambassador.

STACI ANDERSON DIAZ  has entertained audiences all across the U.S.  She  began performing in her Father’s Wild West Show when she was three years old.

As a third-generation performer and artist, she is known for her Roman Riding six-up team of horses. She also drives horses in tandem while standing atop the back team. She performs with dancing horses, does trick-riding, and has been a stunt double in several movies.

Staci is married to World Champion Charro Gerardo “Jerry” Diaz, and they have been performing together for 21 yrs.  The have been married 19 years, on horseback of course, and have become a great team.  They live in New Braunfels, Texas, and have a 15-year old son, Nicolas Adrian Diaz, who performs with them in their shows.

NICOLAS ADRIAN DIAZ has been performing with his Mom & Dad since before he could walk.  The son of Jerry & Staci Diaz has traveled to some of the most prestigious rodeos and horse shows in the country.  He has performed at the Devon Horse Show in Pennsylvania, Ponoka Stampede in Canada, Denver National Western Stock Show, Houston Rodeo and Stock Show, Fort Worth Stock Show, San Antonio Rodeo and Stock Show, and others as well.

Nicolas is a 5thgeneration horseman, following in his parents’ footsteps.  Carrying on the family tradition, Nicolas helps his father train the horses they ride in their performances across the country.

Nicolas performs a style of riding called Doma vaquera which evolved from everyday ranch work in Spain.  Doma vaquera uses a long pole called a garrocha to sort cattle and to test their suitability for the bull ring.  A cross between art and dressage Doma vaquera has evolved into a competitive art form. It features the movement of the Andalusian horse, highlighting his lateral movement, power and impulsion.

Nicolas rides “Universo,” a pure Spanish Andalusian and demonstrates the art and movements of this special breed. 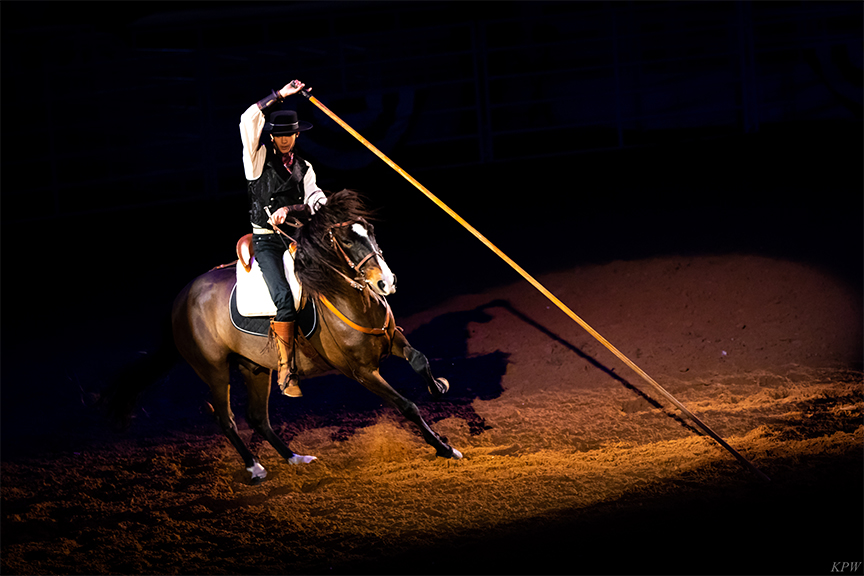 The Diaz Ranch is a beautiful facility with two arenas, one covered and one open arena with seating where they hold corporate parties, group events, conventions, workshops and private lessons.

The Diaz Family offers high quality entertainment  – from their fine Andalusian horses, Roman riding, and dancing horses, to rope artistry on horseback. They are well-known for their Mexican Extravaganza productions.

We are delighted to welcome the Diaz family to Volland!