The Volland Store first presented “Big Sonia” to an appreciative audience on March 30, 2019, and now offers an additional screening for the community

Join us to view this exceptional film 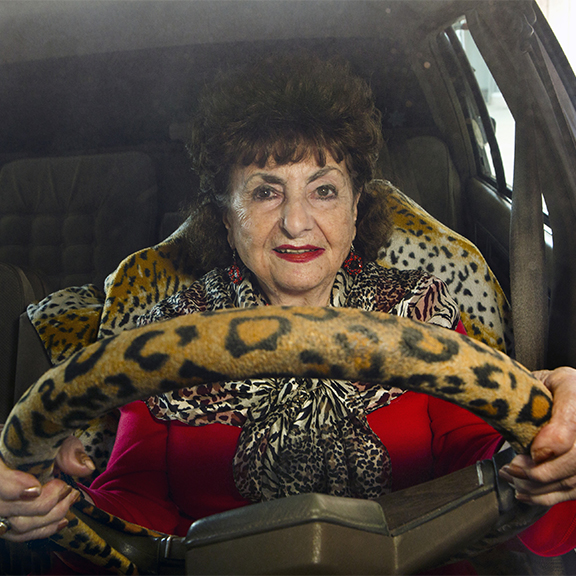 In the last store in a defunct shopping mall, 91-year-old Sonia Warshawski – great-grandmother, businesswoman, and Holocaust survivor – runs the tailor shop she’s owned for more than 30 years. But when she’s served an eviction notice, the specter of retirement prompts Sonia to revisit her harrowing past as a refugee and witness to genocide. A poignant story of generational trauma and healing, BIG SONIA also offers a laugh-out-loud-funny portrait of the power of love to triumph over bigotry, and the power of truth-telling to heal us all.

“Imagine you were asked to do a favor for a family member and pick up something they had dropped off at a tailor shop. You have never been to this shop before, but the older woman behind the counter smiles at you warmly as if you were her own grandchild. She has bright red lipstick and a perfect hairdo. She is tiny, standing only 4’8” tall. As she reaches across the counter to greet you, you suddenly notice the number 48689 tattooed on her forearm. You realize that you are facing a moment in history: you are meeting a Holocaust survivor.

“Her name is Sonia Warshawski. You understand that this kind, Jewish woman with a Polish accent lived all her teenage years amid the terror and pain of the Holocaust. During World War II, the Holocaust resulted in the murder of six million Jews and members of other groups who were persecuted on political, ideological, and behavioral grounds. WWII formally ended in 1945, when Sonia was just 19 years old. Its effects continue to influence the lives of every survivor, and their families.”  – from the  Educational Companion Guide for BIG SONIA

“Sometimes the really big stories come from the smallest places. As ﬁlmmakers, we travel all over the world chasing stories about people making an impact. In making BIG SONIA, we realized some of those stories are right in our own backyards.

“When we began ﬁlming in 2011, my grandmother Sonia Warshawski was 85 years old, and Todd and I had just started dating. On the heels of our last feature documentary, FINDING HILLYWOOD, our intention was to make a short ﬁlm about my grandmother’s small tailoring shop, John’s Tailoring, and its steady stream of loyal customers. My extended family had long joked about using the shop as the subject of a reality show. We’d all long witnessed Sonia holding court from her counter-top podium, doling out marriage advice, recommending WWII books to teenagers, and doing interviews for local news stations. We knew Sonia had a gift for making anyone in her shop feel like they were the most important person in the world. And we knew the shop was her own refuge from the horrors of her past as a teenage Holocaust survivor. Once we started ﬁlming, however, it soon became clear that customers were drawn to John’s Tailoring not just for gossip and human connection, but also for their own redemption. They came in because Sonia sets a glowing example of how an ordinary person can move past deep personal and historical trauma to ﬁnd peace and heal others.

“Still, our time with Sonia revealed her complex side. Her interactions with customers are very diﬀerent from her relationships with her family, which have often been tense and tender, overshadowed by decades of survivor’s guilt and post-traumatic stress. During the course of production, we began to perceive the trauma suﬀered not just by Sonia, but by my aunts and father, who had survived the trauma of a household gripped by grief and loss. As a third-generation survivor, I also began to see the ways in which Sonia’s pain had branded me, the grandchild of refugees, and the child of a parent who’d long grappled with his own mother’s pain.

“Then, suddenly, the plot turned. Sonia’s shop got an eviction notice. Her panic was palpable. And while we knew Sonia would survive the physical loss of her shop, we were also compelled by her store’s symbolic role as a forum for human connection: a stronghold and a place of safety for Sonia and so many others. We continued to ﬁlm, and our “short” turned into a feature. Oh, and in the middle of it all, Todd and I got married. The store was now woven into the fabric of our lives, too.

“Despite featuring a Holocaust survivor, BIG SONIA is not a ‘Jewishmovie,’ and it’s not a ‘Holocaust movie.’ BIG SONIA is a story about humanity: our human potential to overcome even the worst of the world’s sins and atrocities with compassion and understanding. It’s a tale about survival, yes, but not only the heroic kind—the kind that is forced upon victims of genocide. It’s also about the everyday acts of survival we all undertake just to be human: to overlook slights; to rise above bigotry, ignorance and self-doubt; to push for forgiveness even when our instincts urge retribution or bitterness.

“….Sonia’s life story has been called an antidote to the hate and fear we see around us, and we hope that is true. But the real lesson of BIG SONIA is that we’ve all got the capacity to combat the worst of humanity. Like Sonia, we all have the opportunity to create for others the places of comfort and connection where survival takes root.”   – Leah Warshawski

BIG SONIA enjoyed an 8-month run in a Kansas City movie theater following its theatre release in 2017. It has since been shown at the Dole Institute for Politics and in the US House of Representatives (January 2018), at numerous middle schools, high schools, and to 10,000 college/university students across the US. It has been screened at Catholic, Christian and Jewish schools, churches and synagogues, senior living centers, four different prisons across Kansas and six screenings at San Quentin.  The movie has been shown internationally and has received major awards and reviews.

Don’t miss this movie.  It is appropriate for students Grade 7 and above.  Bring your children, your grandchildren.  Enjoy an evening at the movies like none other.

“Not just another Holocaust movie,” proclaims movie critic Christopher Llewellyn Reed. “Sonia [a Holocaust survivor] is a vibrant nonagenarian in Kansas City….lecturing at local schools to keep the memory of Nazi atrocities alive…. Beloved by those who know her, she is a testament to the strength and resilience of the human spirit.”

“It will reach into the tender-most part of your heart and touch it as few movies have.”
– Jeffrey Lyons | Lyons Den Radio | WCBS

“a film about history, how we carry it with us, and why it matters”
– Jennie Kermode, Eye For Film

“structured in a way that bumps the tragic and demoralizing up against the comic and inspirational.”
-Derek Smith, Slant Magazine

“One of the most interesting aspects of this documentary is the second-generation Holocaust survivor’s perspective and the insight into living with intergenerational trauma,”
-Rachel Morrow, Film-Forward

BIG SONIA is made possible with the generous support of the Earl J. and Leona K. Tranin Special Fund of the Jewish Community Foundation of Greater Kansas City
and
Donors to the Volland Store Fund, a 501c3 nonprofit administered by the Kansas Rural Communities Foundation